Home » Nepal » Langtang, Nepal: Know Everything about this Himalayan region

Nepal is the home of Himalayas: this phase is known to the whole world, and so Nepal is recognized by most of the people by it. As the beautiful and glorious mountains are in Nepal, there are many valleys and villages which are also situated in those near the Himalayan region. People pay a visit from around the world to experience the ultimate thrill of climbing the mountains and trekking in the regions of mountains. However, the villages and valleys are also the points of attraction. They are situated in the city areas, and so their lifestyle and tradition have remained as authentic as it were before.

Mustang valley and Upper Mustang are some of the popular places which visited by foreigners as well the national tourists as well. People have enough of a tall building and loud music, they want to see something real, and there are many places in Nepal which can bring you closer to nature and experience you with the culture and tradition like nowhere in the world.

Langtang is an equally popular Himalayan region of Nepal. It is the home to several mountains and is visited by tourist for trekking and mountain climbing. 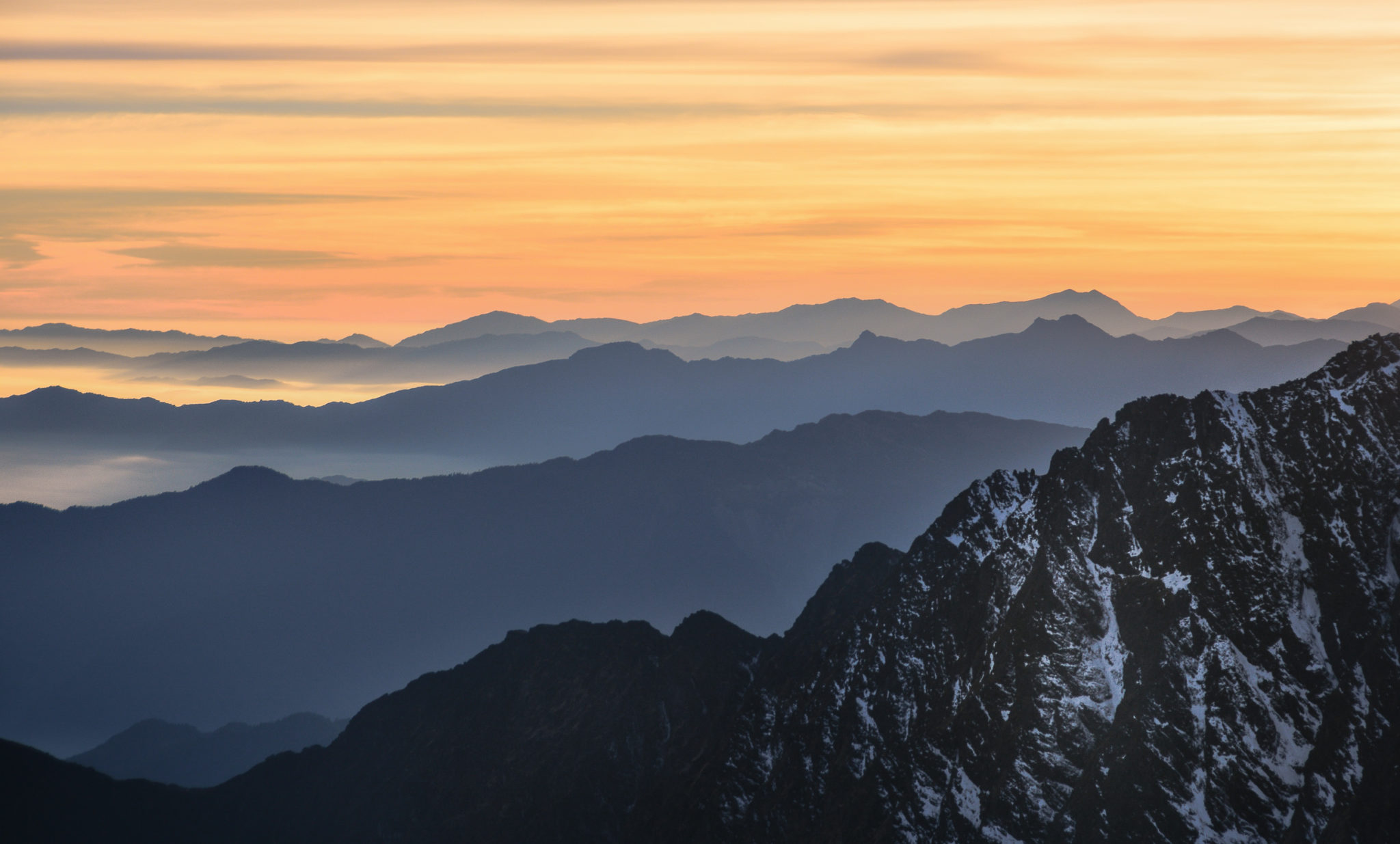 Langtang is the Himalayas region which is located in the northern side of the Kathmandu, and it borders with Tibet. It is bordered on the north by the main crest of the Himalayas and is dominated by the mountain Langtang Lirung, which is of 7,245 meters in height and is the tallest peak in the area. In the south is the Chimse Danda (ridge), crossed by the Ganja La Pass of 5,122 meters and JugalHimal, culminating in DorjeLakpa of 6,989 meters. Langtang River of Langtang is feed by the glaciers that are formed by the LangtangLirung, DorjeLakpa and other mountain peaks. While the main rivers in Nepal flow south from Tibet cutting through the Himalayan chain, the Langtang River, which is a major tributary of the Trishuli Ganga flows from east to west. The Trishuliriver or Bhote Koshi as it becomes above Dunche, forms a very important corridor and ancient trading route through the mountain between Ganesh Himal and Langtang Himal to Kerung in Tibet.

Tamang ethnicity of Nepal dominates the inhabitants of Langtang region. The Tamangs of this region are of Tibetan origin. It is said that they are the descendants of Tibetans from Kerung of Tibet who mixed to the Tamangs from the Helambu area. They follow the Tibetan culture which is hundreds of years old. This place is like a cultural hub of Tamang where the dress, traditionally built stone, houses, lifestyle, a language reflects the rich Himalayan heritage.

The people in this are mainly engaged in the yak and sheepherder. They also grow their food and vegetables for a living. They have a very simple and usual lifestyle where they engage themselves in agriculture and products the local crips like potato, maize, wheat, soybean and millet and raising the livestock. 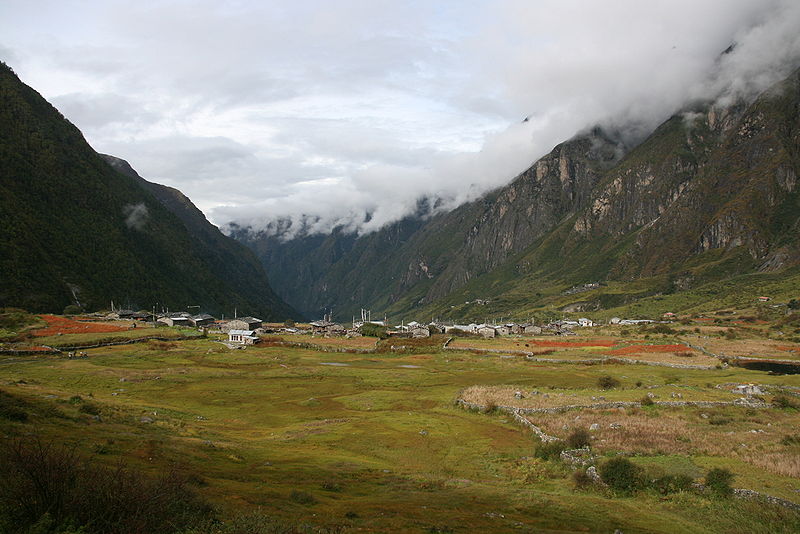 Langtang National Park is located in the same region as the Langtang village. Langtang National Park was established in the year 1976 as the first Himalayan national park, and it is also the fourth national park of Nepal. The altitude ranges to up to 6,450 meters and covers the areas of 1,710 meters. The park is also linked with the Qomolangma National Nature Preserve of Tibet. Gosainkunda Lake which falls with the park area is one of the attractions of the park.

Langtang National Park has a very high diversity with 14 vegetation types in 18 ecosystem types which ranges from upper tropical forest below 1,000 meters altitude to alpine scrub and perennial ice. Oak, chir pine, hemlock, maple fir are some other vegetation that can be found in the park. Talking about the wildlife of the park, Langtang National Park is popularly known for musk deer and red panda.

In Langtang National Park, the climate is dominated by the southwest summer monsoon. The temperature of this area varies in a great amount because of the extreme difference in the altitude of the entire area. June to September is mostly characterized by annual precipitation. Then, from October to November and April to May, the days get warm and sunny and the nights are cool. While in the spring season, raining at an elevation of 3,000 meters usually takes turns to snow at higher altitude region. Then, when the winter arrives, which is from December to March, the days get very clear and mild but the nights get very cold which can freeze you up. 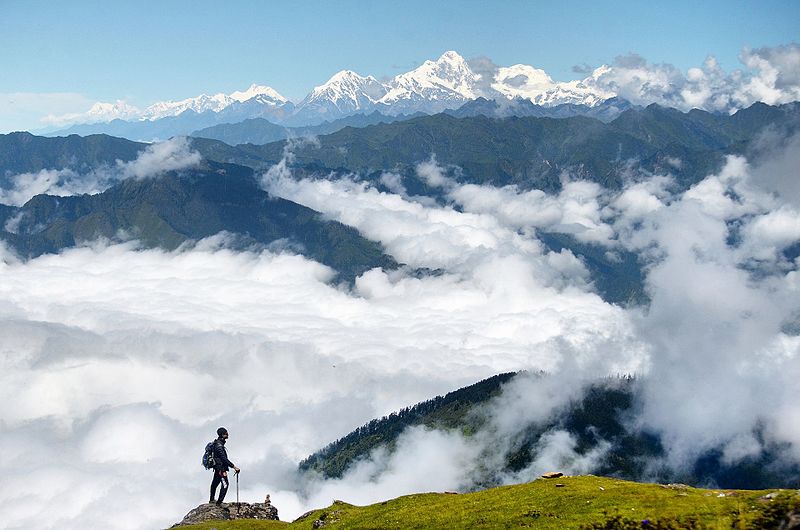 As Langtang is the home to many mountain peaks, trekking in the Langtang region is favorite to many and has been admired by whoever has made up to this region. You can trek in the several routes in Langtang and any route you choose; it will offer you with the breathtaking view of the beautiful peaks with the added flavor of traditional lifestyle of the people in this thing. And, camping in this region will give you the best experinece of all. You will get to be involved with the locals, know their culture and tradition and above all you will know the life of real Nepal. Camping will aid in sustainable tourism by providing employment to the locals as guides and porter and it will promote in ecotourism as well.  Here are popular trekking route in the Langtang region:

Tamang Heritage Trail is a very popular trekking route of Langtang. In this trekking, you will encounter some of the authentic villages with traditional living, amazing grazing land of yaks, and the beautiful view of the peaks in route. You can start from Syabrubesi and follow the trail of the Tamang Heritage Trail. From Syabrubesi comes Gatlang, Nagthali and then Bridim. Then you can join the Langtang trail and follow the route to the Langtang valley.

This trek is the extended route of Langtang trek. You will trek to Langtang from Syabrubesi and comes to the holy lake, Gosainkunda. Gosainkunda is one of the beautiful lake of Nepal which has religious importance as well. Gosainkundis referred in the Hindu Scriptures like Ramayan and Mahabharat. The lake is visited by thousands of pilgrims from Nepal as well as India. From Gosaikunda you will trek back to Syabrubesi, or you can choose to trek to Sundarijal and finally reach to Kathmandu.

It is the shortest version of the Langtang trek. After arriving atSyabrubesi from Kathmandu, you will trek to the beautiful valley of Langtang. From Langtang comes Mundu and then Kyangjin Gompa. You can spend some time in gompa and got to know the locals and their culture in a more close way. From Kyangjin Gompa you will trek back to the Syabrubesi.

What is the best time for trekking in Lantang?

It will work best to visit Langtang for trekking during the Spring and Autumn Season. You can choose to trek in another season as well. However, that season might comprise of some challenges making the path difficult than it is. If you trek during Spring, you will get to see the mountain view in crystal clear way without any clouds and fogs as the days are very clear. You will also pass the colorful and delightful forest of rhododendron, which is also the national flower of Nepal. In Autumn season the days are clear, and the weather is perfect for the trekking.

Trekking in winter might not be the best choice as the weather gets very bitter and extreme because of low temperature and heavy snowfall. However, you can trek making sure that you have acclimatized enough and is prepared to trek in high elevation with all the necessary items and equipment. In summer, it will be best if you don’t trek. Summer is started with the scorching sun and then comes monsoon with heavy rainfall, thunder, and storms. The trail becomes very muddy and slippery because of rain, and you will also find leeches and insects in the forest trail. Also, mountains are covered with clouds and fogs refraining you from the perfect view.

Kala Patthar: From where you can view the Everest closely
Kirtipur: A Beautiful and Historical City of Kathmandu