Home » Nepal » Kala Patthar: From where you can view the Everest closely

Years thousands of people make their way to the Everest Base Camp, which is also the famous trekking destination of the world. And, many of them conquer this ultimate monument build by nature. There are many exciting things you can encounter in the trekking to the base camp of Everest, and in there, Kala Patthar is also the one.

About Kala Patthar and why it is so famous?

Kala Patthar means “black rock” in the Nepali language, and it is a very notable landmark of the Everest Base Camp which lies on the south ridge of Pumori in the Nepalese Himalayas above Gorakshep. Kala Pattar is not a mountain, it stands only with the height of 10 meters/33 feet, and still, it is popular. The reason why Kala Patthar is famous is, it provides the most accessible close-up view of the Mount Everest. So, after all the effort trekkers make to reach the Everest Base Camp, they don’t want to lose the chance to see the tallest and the majestic mountain closely. Because of the structure if the Everest Massif, its high summit gets blocked by the Mount Nuptse from much of the surrounding of the region. So, reaching in the Kala Patthar, you will see the spectacular view of not just Mount Everest but of Mount Nuptse and Changtse too. Also, there is a glimpse of the northern flank and summit of Mount Lhotse.

Although the height of Kala Patthar is just 10 meters, it is situated at an elevation of 5,644.5 meters/18,519 feet. De. Luis A. Ruedas, the Assistant Professor of Portland State University,took a Garmin eMap GPS unit to the summit on December 6, 2006. Those units are capable of averaging a series of individual satellite reading which makes them more accurate than a single reading machine. With the average 48 reading, the elevation was drawn as 5,643 meters. Also, another test was done in October 2008, by a GPS with WAAS, which confirmed the data of 2006. There is a possibility that since Kala Patthar is just a minor summit on a ridge leading towards Pumori, different people might have measured different summit.

Kala Patthar Via Everest Base Camp

Your Everest Base Camp trek starts from the Kathmandu itself, although the actual trekking doesn’t start from here. From Kathmandu, you will take a domestic flight to the Lukla (2,860 meters) which is a very thrilling experience because the airport of Luklais located at such an amazing place. Lukla itself is a very beautiful place surrounded by green hills and mountains. From Lukla, you will trek to Phakding, which is at an elevation of 2,610 meters. Phakding is a charming little village of Khumbu region where you will find many shops as per the need of trekkers. The primary function of Phakding village is to support the tourism industry.

Moving forward from Phakding, you will reach Namche Bazaar. Namche Bazaar is at an elevation of 3,440 meters, and it is a very popular tourist hub. Most of the trekker prefers to stay here for a few days for acclimatization before moving to the higher altitude regions. It is the main trading center where you will find all kind of shops, a police check post, bank, and many Nepalese officials. From Namche, you also see the view of Kongde Ri (6,187 meters), which is at the west side and Thamserku (6,623 meters) which at the east side. While staying in Namche, you can camp in this place as there are several campingsites and get to explore and experience more while supporting the eco-tourism at the same time.

After Namche Bazaar come to Tengboche, which lies at an elevation of 3,860 meters. Tengboche is a popular place that falls en route to Everest Base Camp. It is a very delightful village filled with beauty and a lot of traditions and culture. Here lies the largest monastery of the whole Khumbu region, Tengboche Monastery. It is mostly inhabited by the Sherpas, and their tradition is influenced by the Tibetan Buddhism. You will as see the amazing panoramic view of the Himalayan Mountains including Everest, Nuptse, Lhotse, Thamserku, Tawache and Ama Dablam.

From Tengboche, you will trek to Dingboche (4,410 meters). Dingboche is a Sherpa village, and it heavily depends on tourist with lodges and tenting areas. After Dingboche come Lobuche (4,940 meters), a small settlement area of Khumbu. Then from Lobuche finally comes the Everest Base Camp (5,364) and you will trek to the Gorak Shep (5,164 meters) the very same day.

The next you after the sightseeing of beautiful views around, you will walk to the Kala Patthar. Most of the trekkers prefer to trek towards Kala Patthar in the early morning because in the daylight you won’t get the best view as the sun rises behind the Mount Everest and Lhotse. So, in the dawn light, the visibility is much better and perfect. It will take you about four hours to climb the Kala Patthar and come back to Gorak Shep.

Descending from Gorak Shep, you will trek to Pheriche (4,371 meters), which is the popular stop for trekkers and climbers. From Pheriche, you will descend directly to Namche and then to Lukla. From Lukla taking a domestic flight, you will fly back to Kathmandu. 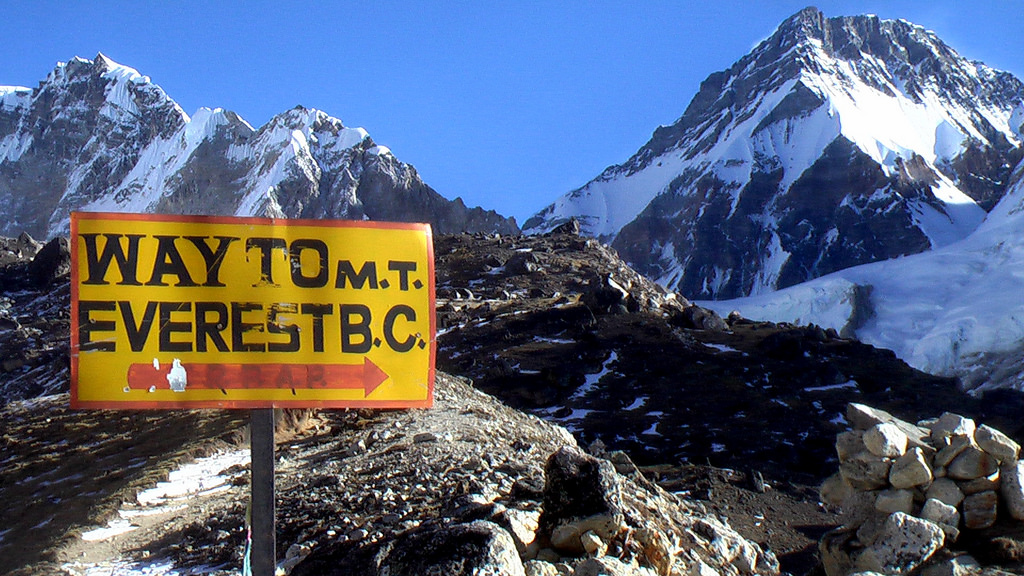 Altitude Sickness is a great risk while climbing the higher elevation. It is a negative health effect of higher altitude because of exposure to low oxygen and higher altitude region. Nausea, headache, vomiting, trouble in sleeping, dizziness, tiredness are some of the symptoms of altitude sickness. It possesses a great risk to you if you don’t take the right steps. The best way for altitude sickness is acclimatization, which means to adjust the change in environment like a change in temperature, altitude, humidity and so on.

Most of the trekkers stay in Namche for two-three days for acclimatization. Moving up to the higher region, you can stay at any place if you start to feel anything unusual in your health. You must not climb for more than 300 meters/1,000 feet once you have reached 3,500 meters.

If anything gest serious, descend immediately. In Pheriche, there is a hospital which is operated under the auspices of the Himalayan Rescue Association (HRA) which is headquartered in Kathmandu. However, the hospital is open only during the trekking seasons.

What is the best time for Everest Base Camp Trek?

Spring the most popular season for trekking and mountain climbing in Nepal and this season falls in March-May. In March, April and May, the climate is perfect, the temperature is moderate with crystal clear sky and perfect day. Spring is the best season because there are no rains and the days are warm as well. You will also encounter the delightful and beautiful forest of rhododendrons blooming in different colors.

September-November is just after the monsoon. As the monsoon ends clearing the dark cloud from the sky, it is the perfect months for trekking. You don’t need to be worried about getting burnt by the sun as there are less heat and less cloud as well. The days are just clear giving you the chance to view the tallest mountains of the worlds spectacularly, along with several other peaks. You don’t have to walk through snow or mud on the way. The villages and valleys are green, and the weather is just perfect making you trek more enjoyable. Although the night might be a bit of chilly, you can always avoid it by lighting a fire while camping and keeping yourself warm under the starry sky.

Shey Phuksundo Lake: Mesmerizing, with a Turquoise touch
Langtang, Nepal: Know Everything about this Himalayan region