One can witness several types of festivals in Nepal. Being rich in culture and tradition, Nepal uniquely celebrates every festival. The festivals and celebration differ according to the ethnicity and their custom in Nepal. Following the same line of tradition is not enough to define the core culture of ethnic groups of Nepal. The very same festival in Nepal is celebrated by different names and in different ways.

Several ethnic groups of Nepal celebrate festivals like Janai Purnima as rakhi, Kwati Purnima and Janai Purnima itself. There are festivals which are celebrated by a particular group like Udhauli and Ubhauli is celebrated by Rai group, and Newar group celebrates Gai Jatra. And, festivals like Holi is celebrated in two days, one day in the Hilly and Himalayan region and next day in the Terai region. All these variations in festivals and their particular way of celebration make Nepal a country of diversified culture and tradition. 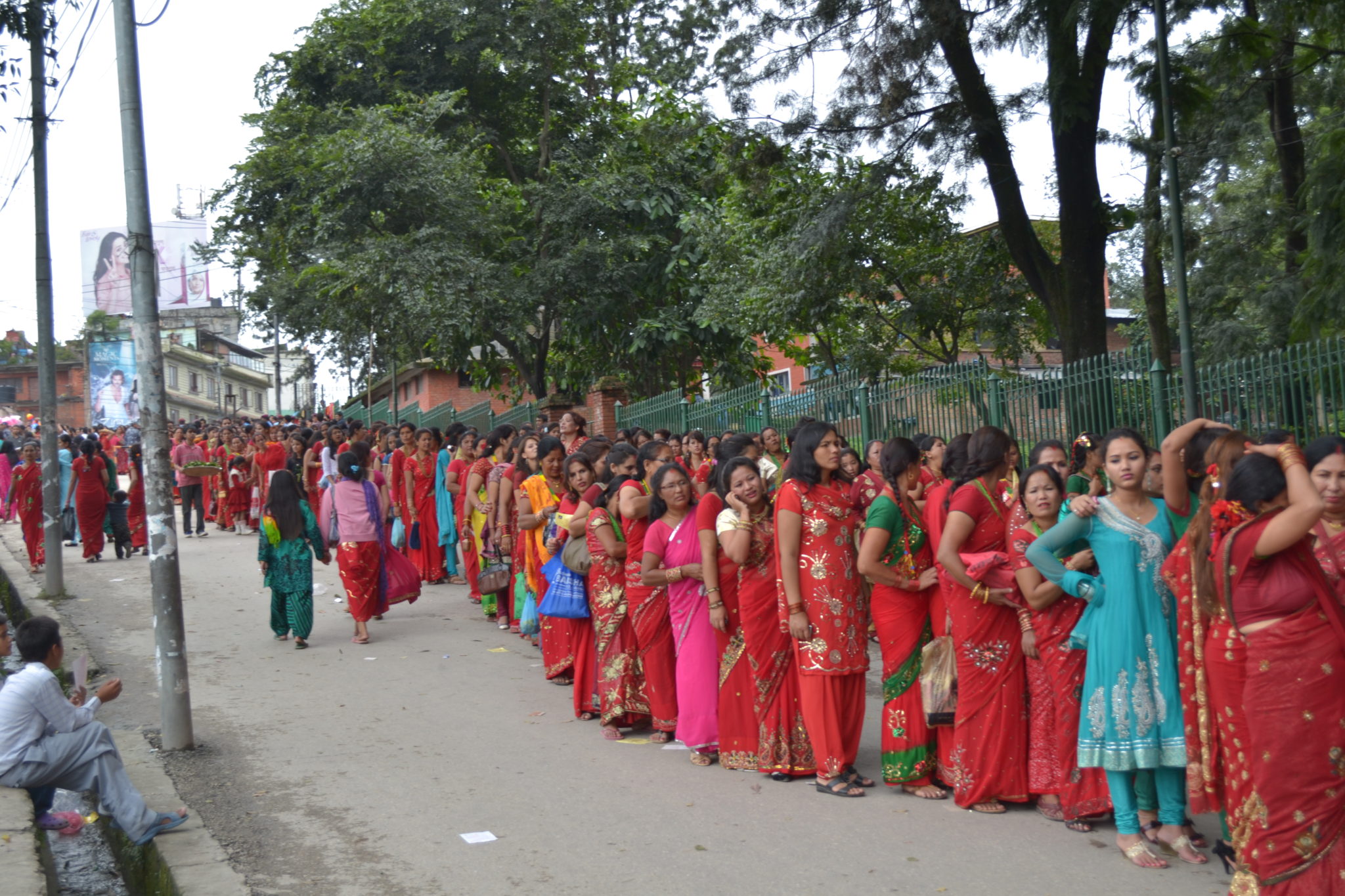 Teej is a common name for the festivals which are celebrated by women. These festivals are mainly observed in Nepal and some parts of India. The festivals of Teej is generally dedicated to Goddess Parvati and her union with Lord Shiva. It is a monsoon festival, celebrated mainly in northern and western states of India, Nepal and also in some of the southern states of India. Teej is also celebrated the bounty of nature, the arrival of clouds and rain, greenery and the beautiful birds with joyous social activity, ritual, and customs.

In Teej, women come together in one place, they sing and dance by getting dressed-up in best attire, especially the red one and they also have a feast.

The meaning of the word “Teej” is “third” day that falls every month after the new moon and the third day after the full moon night every month. There are mainly three types of Teej which are observed in Nepal and different parts of India. The festivals of Teej are traditionally celebrated by women to celebrate monsoons, on the third day of Indian month of Shravan and the third days of waning and waxing moon of the Indian month Bhadrapada. During this festival of Teej, women pray to the Goddess Parvati for her blessing to her husband, children, and family and herself. There are mainly three types of Teej which are generally observed.

“Haritalika” is made of a combination of two words, “harit” and “aalika,” which means “abduction” and “female friend” respectively. The essence of the meaning of words has a story. As per the legend of Haritalika Teej, Goddess Parvati incarnated as a daughter of the king of Himalaya who promised to marry her to Lord Vishnu at the suggestion of Narada. Knowing this, Parvati shared it with her friend who took Goddess Parvati to a thick forest where Parvati’s father couldn’t find her so that he couldn’t marry Parvati to Lord Vishnu against her wish.

Then on the third day of the bright half of Bhadrapud (Indian month), Goddess Parvati made a Shiva lingam from her hair and prayed to him. By this act of her, Lord Shiva got so impressed that he married Parvati with her father’s blessing. From that time on, the day is referred as Haritalika Teej as Goddess Parvati’s female (aalika) friend abducted (harit) her so she could marry Lord Shiva, whom she always wanted to.

Women who observe Haritalika Teej feast the evening of the Teej and prayers to Lord Shiva and Goddess Parvati. They remember Shiva and Parvati’s wedding and stays up all night listening to the prayers. Next day they keep fast without food and water.

This festival celebrated on the third day of the bright half of the North Indian month of Shraavana. The month of Shraavana falls during monsoon or rainy season when the environment is green, so that why this Teej is named as Hariyali Teej (Green Teej).

Like Haritalika, Hariyali Teej also focuses on the celebration to remember the reunion of Lord Shiva and Goddess Parvati. But as per the belief of this Teej, Lord Shiva married to Parvati in her 108 birth after she fasted and was austere for many years.

Hariyali Teej is celebrated in different ways in Indian states like Punjab, Haryana, and Chandigarh.

Kajarai Teej is also called Boorhi Teej or Kajali Teej. It is celebrated in the third day of Indian month, Bhadrapada. During this Teej, women sing folk songs, whose lyrics tell about the pining of women for her separation from her beloved parents’ house, where she has been sent to celebrate Teej or in wait for her brothers to be collected to celebrate Teej. In this Teej too, women keep fast without any food or water and later after praying for the moon, they break the fast by eating sattu. 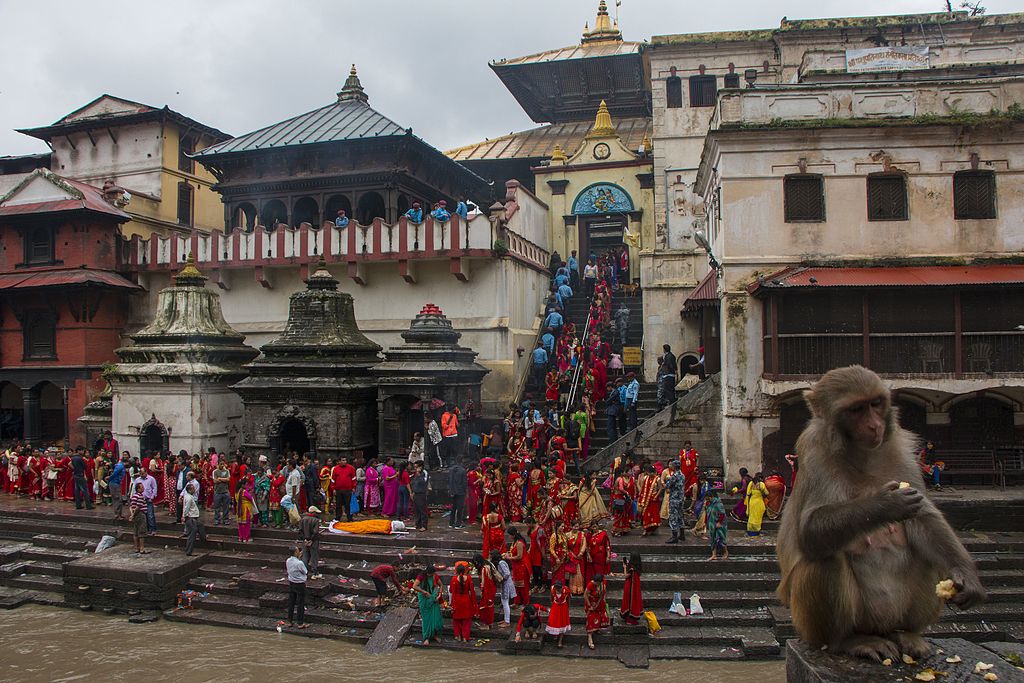 The Teej of Nepal is dedicated to the Goddess Parvati to mark the union of her with Lord Shiva. Teej is celebrated by Nepali women for the well-being of her husband and children and purification of her body as well as the soul. Teej in Nepal is a three-day long festival where women have a grand feast followed by the next day of rigid fasting. This Teej in Nepal is also called Haritalika Teej.

Teej is one of such festival which brings and ties women together. Along with this traditional importance, nowadays Teej is also celebrated for social causes like raising awareness of women regarding gender equality, to act against violence to women and discrimination against her by family.

The very first day of Teej is the feast day, which goes by Dar Khane Din. In this day women assemble at one place wearing their finest dress, which is generally red sari and using makeup in full extent. Then they start to dance and sing in various Teej songs. There also takes place a very grand feast, with rich and abundant foods. The singing, dancing and enjoying the feast last until midnight and then start 24 hours fast. In this day, married women also get called or collected by her parents or brother in their house to have a grand feast.

This day is probably the only day for Nepali women to be free from the responsibility and cease the moment. Whole year they take care of her husband and family and devote themselves to be an ideal wife and mother, but this day they enjoy the full freedom, and her husband or family member don’t even restrict her.

In this day, women get dressed in the best look and visit the nearby temple of Shiva. They worship and offer their prayer to Shiva Lingam, which symbolizes Lord Shiva. They offer flowers, sweets, fruits and coins to Lord Shiva and Goddess Parvati to grant them with blessing. The most important part of is the oil lamp which should be alight throughout the night, and it is believed that the light of the lamp all night will bring peace and prosperity to the husband and family.

This is the Rishi Panchami Day. Women pay homage to the seven saints after previous day puja. They take bathe with red mud found on the roots of the sacred datiwan bush along with its leaves. It is in general belief that this act will absolve all their sins.

This year Teej will be celebrated in 27 Bhadra (12 September) which is the main fasting day, the day when women visit temples and dance with all their heart. You can visit the temples, especially Pashupatinath to witness this unique and joyous festival of Nepali Hindu women.