Namche Bazaar is the popular town of Khumbu typically used by trekkers and mountaineers of Everest for acclimatization, and it the very reason why Namche is also known as a gateway to Everest region.

This beautiful mountain town is the predominant of Sherpas most of them engaging in tourism business. Namche is a surprisingly beautiful village with rich culture and glorious views of mountain around. So, today let us know about the Namche, an indigenous Sherpa village of Nepal. 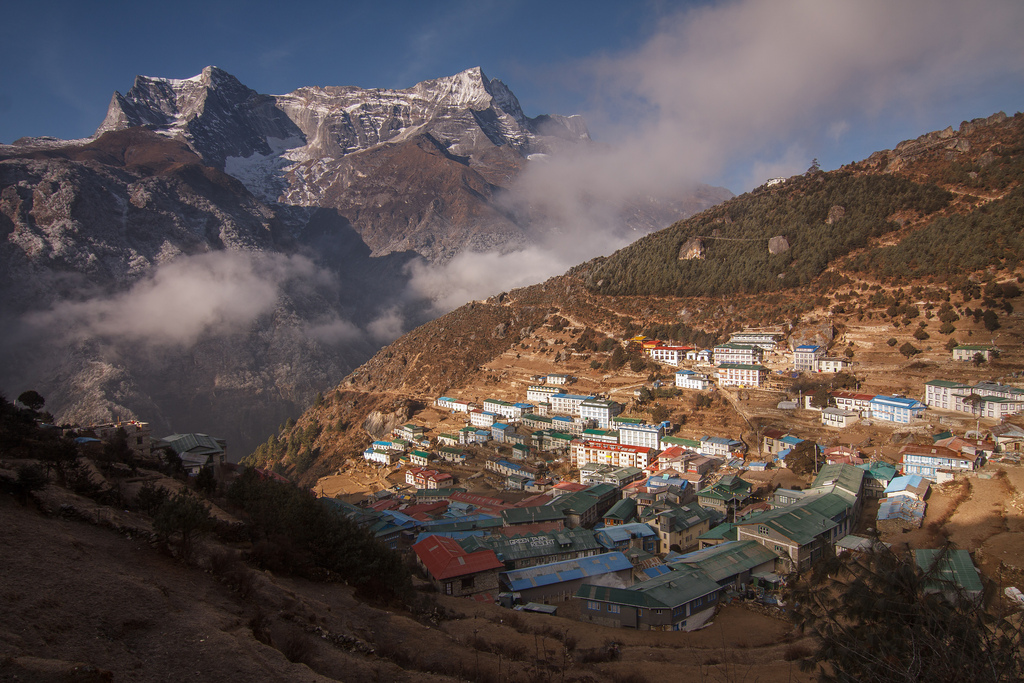 Namche Bazaar is located at an elevation of 3,440 meters within the Khumbu region of Solukhumbu. The settlement of Namche is unusual but beautiful as the sides of the hills are largely populated than the low point, forming itself like a stunningly painted bowl. This nature gifted town has Kongde Ri at 6,817 meters in west and Thamserku at 6,623 meters in east.

Namche Bazaar is situated on crescent-shaped mountain slope offering a breathtaking view of snow-capped mountains across the valley. As Namche is at above 3,000 meters, there is a high possibility of suffering from altitude sickness from here, so trekkers and climbers spend at least two night for acclimatization.

Namche as the Trading Hub

Namche Bazaar is a popular town among trekkers of Everest region. To serve a large number of visitors, there are many hotels, lodges, cafes, restaurant and other stores serving the need of tourist. You can also get every trekking and mountaineering equipment here. So, clearly Namche has prospered from the tourism and as per the government statistics, it is the wealthiest in Nepal, with seven times the average national income and twice that of the Kathmandu.

Along with the hotels and cafes serving tourists, people of Namche has put their effort together and established three small museums, a stupa, monastery and many well-stocked stores with interesting items and artifacts.

But Namche was always this famous or rich. Looking back at time, it was just a trading post with locals bartering for yak cheese and butter in exchange of agricultural goods grown in lower altitude regions. However, after Everest was successfully scaled by Tenzing Norgay Sherpa and Edmund Hillary in 1953, the rest became history.

People from around the world started to pour in Nepal to conquer the highest mountain of the world, and with increasing place of trekkers and climbers, Namche changed for forever, but of course, change takes time. Namche welcomed the groups in small numbers during the initial years, however in 60s and 70s this turned into a torrent and being at a confluence of trekking trail, Namche was the best place to serve the needs.

Also, as Namche Bazaar is the first stop on Khumbu region above the altitude sickness threshold (3,000 meters), trekkers and mountain climbers prefer to spend at least two nights in Namche for acclimatization. But, Namche would have grown more if not for the geographical restraints. Despite its popularity, Namche has very less dwellings than the actual need.

Namche Bazaar also has many official money changing facilities, and it is the only place in the whole region including Lukla to offer this service. So, it is the last place for travelers to ensure that they are carrying enough cash for the remainder of their journey. Also, on Saturday morning a weekly market is held at the center of the village where you can buy many local items. You will also find a daily Tibetan market where clothing and cheap Chinese consumer good are the main items for sale. 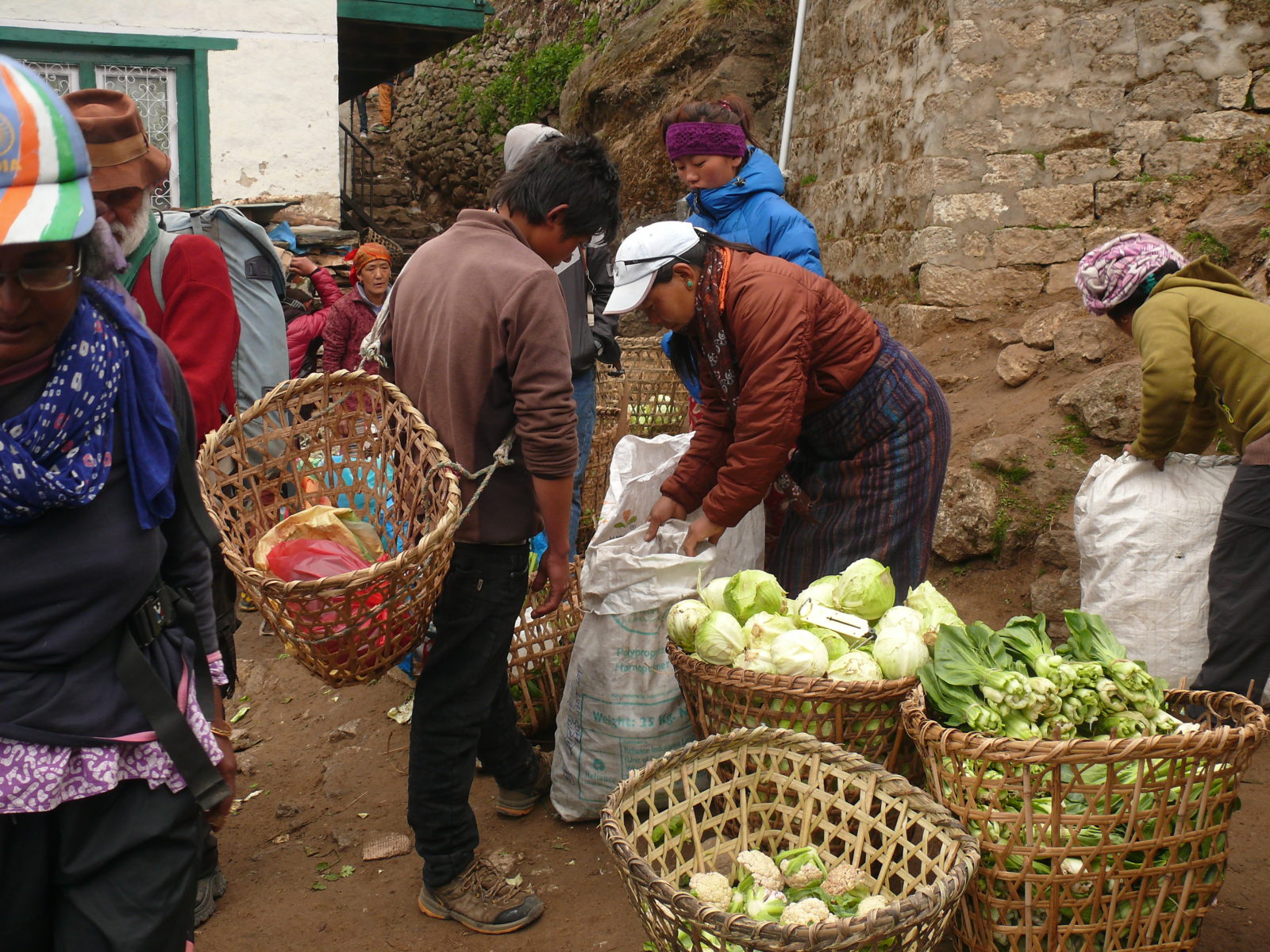 Climate and Transport at Namche Bazaar

As Namche is located in higher altitude region at 3,440 meters, the weather is usually a bit cold. In winter, the climate is cold and dry, while summers are warm, but characterized by persistent mist and so the snow-capped mountain peaks often get lost from the view.

Mid-September to mid-November will be the best time to visit the area as the climate is quite perfect with not too cold weather and days are crystal clear allowing us to view the mesmerizing mountains. Spring is another good time to visit when rhododendron and wildflowers bloom so stunningly.

Travelers to Namche Bazaar trek from Lukla and it can be done in one full day if you are an experienced trekker and in perfect fitness. Otherwise, for regular trekkers, it takes two days, and it is recommended to trekkers to hike in slow speed because travelers who rush to Namche suffer altitude sickness and have to be brought down again the following day.

Talking of transport, there is the Syanboche Airport at 3,750 meters on the hill, but it is no longer used for passenger flights. However Russian helicopters make occasional cargo flights. Tenzing-Hillary Airport also known as Lukla Airport is the nearest open airport from Namche Bazaar. 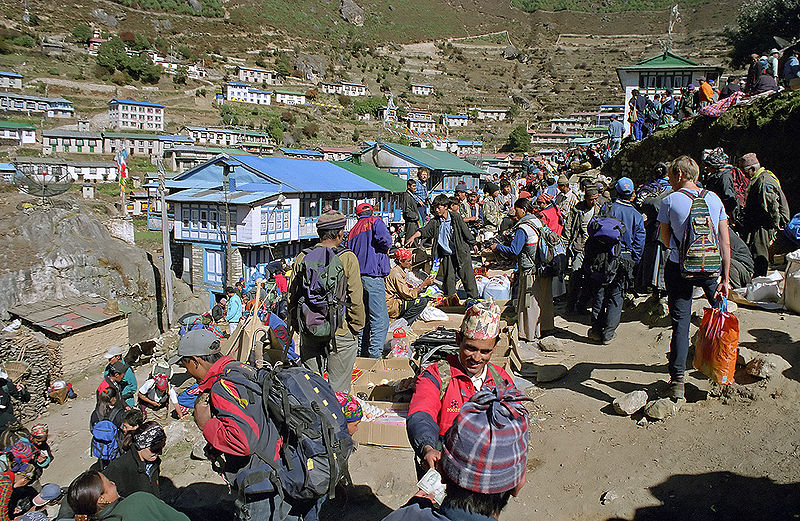 Things to do Namche Bazaar

Sherwi Khangba is Sherpa language meaning Sherpa’s home. It is a traditional Sherpa house dedicated for the preservation of Himalayan Sherpa culture. The center preserves many such items and artifacts which depicts the typical lifestyle of Sherpas.

Khumbu International Library is another wing of this center consisting of a huge collection of books, audios, and videos on the topic of national and international mountaineering and trekking. Sherwi Khangba also owns a hotel and an international conference hall.

Every Saturday Namche Bazaar holds a weekly market where Sherpas from surrounding villages come together and spread out their agricultural products and electronic goods carried from Kathmandu on land above the main path into town. People assemble early in the morning and set their shop in eastern corner of the village. Except for agricultural products and electronic items, you can also find woolen clothes, butter and cheese, trekking gears and so on.

Well, you might find the goods too mundane, but the market as a whole is way more interesting to watch and wander around. Namche market will be a perfect place to buy a souvenir of Khumbu. Also, visit the yak parking area above the market, but don’t get too close as yaks are ill-tempered animals.

In Namche, you can witness a very interesting festival called dumjee in annual term. Dumjee is not a “Namche Bazaar festival,” it is celebrated by all the villages in Khumbu, but the festivities, cheer, and excitement in Namche are most impressive than anywhere. The festival is celebrated in the month of June with much energy and cheerfulness and hilarious lama dances, traditional Sherpa dances and an initiation ceremony.

Dumjee festival celebrates the achievement of highly respected Sherpa lama. The first few days of festival less group of people with just local families visiting each other for food and entertainment, while the final few days has is a huge affair held at Namche Monastery. The ceremonies of festival are presided over by the incarnate lama of Tengboche Monastery.

Apart from the array of hotels and lodges, Namche Bazaar offers many unusual and beautiful handicrafts which are worth keeping as a souvenir. There is a significant number of shops and stores for both commercial purpose and publicity of local products.

You can see the main street into the village is lined with many Tibetan run handicraft stores. Sherpas are also into the traditional handicraft business. Most of the goods in these stalls are available in Kathmandu, but there are certain woolen items which are made locally. You can also find something of your int erest than has been carried over from Tibet.

Everest Base Camp: In the vicinity of world’s tallest peak
Cho Oyu: Towards the Sixth tallest Peak in the world