Nepal is best defined by its natural beauty, which consists of varied topography, rich biodiversity, Himalayas and the distinctive culture and tradition comprising ancient heritages and monuments. From Illam of eastern region to Khaptad National Park in the far-western region, Nepal has a very long list of beautiful places.

Mustang of Nepal is one of such places which has alluring beauty as well as the isolated living of people in this region which has kept its ancient charm and tradition.

Mustang, also known as the forbidden kingdom of Nepal is the remotest district of Nepal and is characterized by very less population. Mustang is bordered by the Tibetan plateau, and it has some of the world’s highest mountains which includes Annapurna and Dhaulagiri, both of them are above 8,000 meters and other peaks above 7,000 meters. Mustang ranges from an altitude of 1,372 meters to 8,167 meters. The entire Mustang is within the Annapurna Conservation Area, which is the largest protected area of Nepal.

Since 1795, the kingdom of Mustang was a dependency of the Kingdom of Nepal, but the Republican Government of Nepal abolished it on October 7, 2008. With the establishment of Nepal as a federal democratic republic country, the monarchy of Mustang came to an end. The Upper Mustang of Mustang was a restricted demilitarized area until 1992, making it one of the most preserved regions in the whole world. It was only in 1992 when the Upper Mustang started to welcome the foreigners, but still, there are strict rules and regulations of tourist which has ultimately helped in keeping up the Tibetan tradition.  Upper Mustang is an isolated region and untouched form the outside world and the people of this region still speak traditional Tibetan language.

A Brief History of Mustang

The history of Mustang is mostly based on the legends than the facts. There is a belief that Mustang was once the part of Ngari area of Tibet. By the 14th century, most of Ngari became a part of Malla Empire (capital Sinja in western Nepal). Then from the 15th to 17th century, Mustang hold the control over the trade between Himalayas and India. In 1380, Lo Manthang became an independent kingdom under Ame Pal. The most of founding and building of Lo Manthang and Mustang was taken over by Ame Pal. But, the only remaining monument of these kingdom is the still-intact Kingdom of Lo, an area corresponding to the northern third of Mustang District.

Then, in the unification of Nepal by Gorkhali King Prithvi Narayan Shah, Mustang was annexed at the end of 18th century and became a dependency of the Kingdom of Nepal in 1795. Until the year 2008, Mustang was the ethnic Tibetan Kingdom and suzerainty of Kingdom of Nepal, but as the civil war overthrew the monarchy, the monarchy of Mustang ceased too,and it became another district of Nepal. 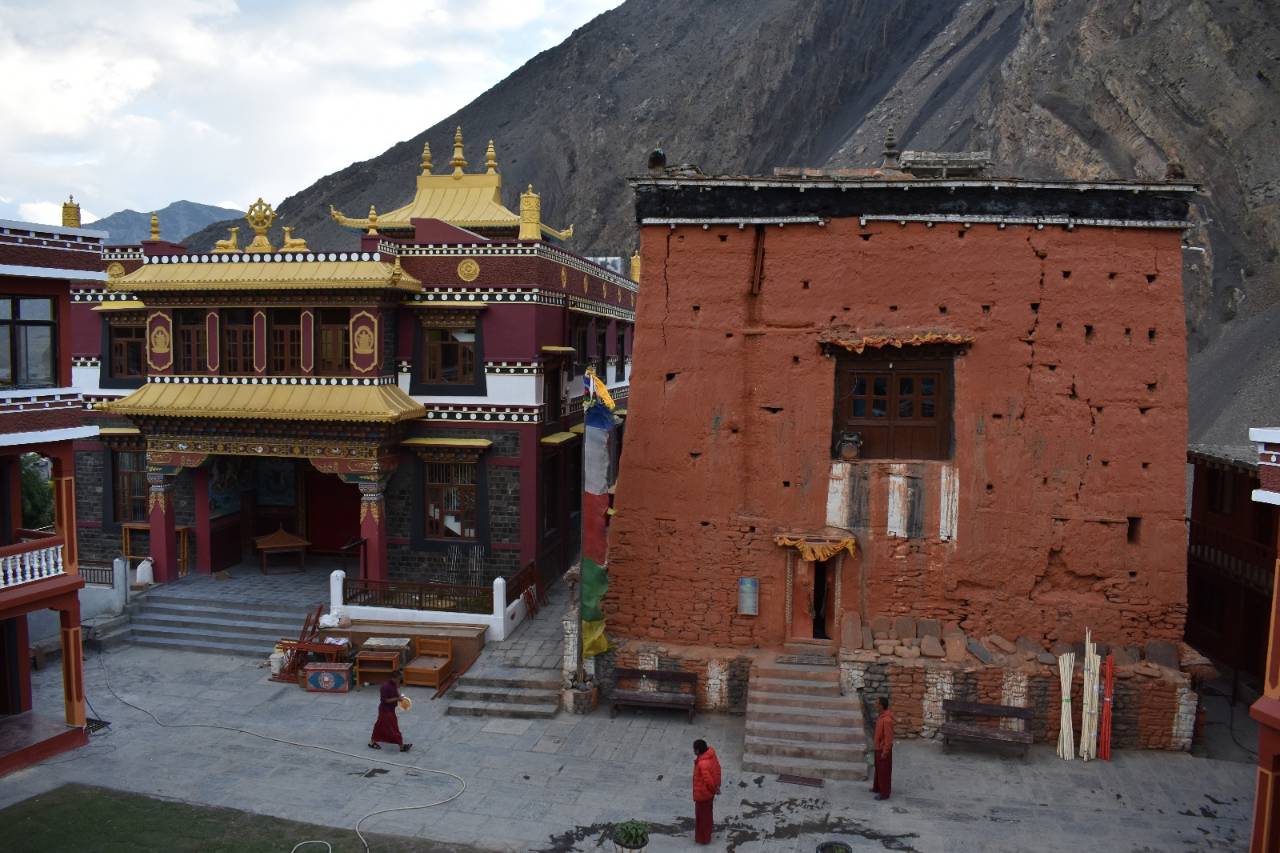 Places to visit at Mustang

The village of Lo Manthang is noted for its tall whitewashed mud-brick walls, monasteries and the former palace of Royal King of Mustang. The palace is a nine-cornered, five-storey structure, which was built around 1400. During the earthquake of April 2015, the palace suffered damages with multiple cracks. In Lo Manthang, there are four main temples: Jampa Lhakhang, also known as Jampa Gompa is the oldest one built in early 15th century and called as the “God House”: Thubchen Gompa, built in the late 15th century is in the southwest side of Jampa Gompa and has a huge and red assembly hall: Chodey Gompa is now the main city gompa and the Choprang Gompa, also known as the “New Gompa”.

Jomsom, also known as Dzong-Sampa or New Fort lies at an altitude of 2,700 meters in Mustang. Jomsom extends over both banks of the Kali Gandaki River. In the river of Kali Gandaki, there are several black rocks and stones which are called shaligram as per the Hindu culture. Those stones are considered holy and are taken as a form of the God Vishnu. As these stones are only found in the Kali Gandakiriver, the locals who are unaware of it sees them as a holy stone. The gorge of Kali Gandaki is also the deepest canyon in the world.

From Jomsom, you can also see the beautiful peaks of Dhaulagiri and Nilgiri. A visit to Jomom will reveal the amazing diversity of Nepal. You will come across the different culture and tradition of ethnic groups as Jomsom has mix cultural combination of Hindu as well as Tibetan Buddhism, get to explore the people who have been living in isolation and get to see some historical monument. There are deep valleys and high mountains which encircles the magnificent Mount Annapurna with a wide range of terrain, from subtropical jungle to a high, dry landscape resembling the Tibetan Plateau.

Jomsom also suffered some damages during the earthquake of April 2015. About 15-50 buildings along the river bank suffered damages by a slowly progressing landslide after the earthquake. However, no injuries were reported.

Located in Mustang, Muktinath is a sacred pilgrimage for Hindu as well as Buddhists. The Muktinath temple is located in the Muktinath valley at an altitude of 3,710 meters. It sits near to the village of Ranipauwa, which is often called as Muktinath.

The area of Muktinathis called as Mukti Kshetra as per the Hinduism, which means the “place of liberation.” According to the Sri Vaishnava sect, there are 108 DivyaDesam(premium temples),and the temple of Muktinath is considered to be 106th. In Sri Vaishnava literature, the ancient name of this place before Buddhist origin is Thiru Saligramam.

Also, as per the Buddhism, the founder of Tibetan Buddhism, Guru Rinpoche, who is also known as Padmasambhava mediated at Muktinath on his way to Tibet. Muktinath is a very significant site for Tibetan Buddhist of daikins, goddesses known as Sky Dancers and is one of the 24 Tantric places. There is a general understanding that the statue is the manifestation of Avalokitesvara, who embodies the compassion of all Buddhas.

The temple of Muktinath is one of the most ancient Hindu temples and is dedicated to Lord Vishnu. The temple rather is small with the idol of gold which has the height of a man. The outer courtyard of the temple has 108 bull face tapes which pours water and devotees visiting the temple takes a bath from all those tapes no matter how freezing the temperature is. The worship of temple is done by Buddhists, with a Buddhist monk present. The local nuns, however, mangle the prayer rituals.

The caves in Mustang are the collection of about 10,000 human-made caves which are dug into the side of valleys in the Mustang. While exploring the caves by several groups of archaeologist and researchers, partially mummified human bodies and skeleton where found which are at least 2,000-3,000 years old. Also, the exploration let to the discovery of Buddhist paintings, sculptures, manuscripts and numerous artifacts which belonged to the 12th to 14th century. You can see these cave on the steep valley walls near the Kali Gandaki River in Upper Mustang. The research groups have continued the examination and investigation of these caves as several things are yet to be unraveled like who built these caves and why were they built. Researchers have estimated that these caves were built in 8-10,000 BCE.

Also, a collection of 55 cave paintings have discovered a shepherd in 2007 near the village. Those paintings depicted the life of Gautam Buddha. Again, a series of at least twelve caves were discovered in the north side of Annapurna and near the village of Lo Manthang. Those caves were decorated with ancient Buddhist paints and were set in sheer cliffs at the height of 14,000 elevations. The paintings also show the Newari influence, which dates back to the 13th century and also contains Tibetan executed in ink, silver, gold and pre-Christain era pottery shards. While in exploration, stupas, decorative art and paintings are showing the various form of Buddha, often with his disciples, supplicants,and attendants. There were also some mural paintings showing sub-tropical themes containing palm trees, birds and billowing Indian textiles. 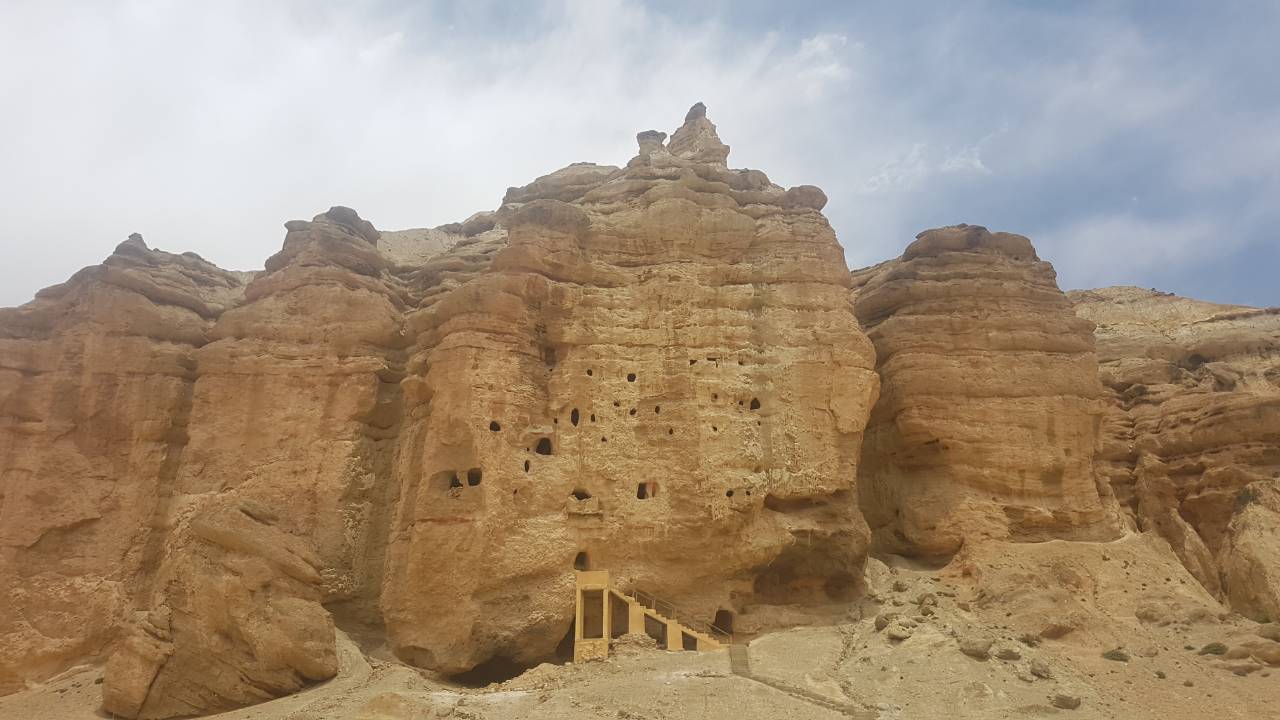 From Everest to the Indian Ocean: Sano Babu Sanuwar and Lakpa Tsheri Sherpa
Dashain: The Greatest and the most Auspicious festival of all