Khumbu Valley and Cho La Pass trek is an exciting trek that gives you a panoramic view of the tallest mountains of Nepal, like Mt. Cho-Oyo, Mt. Makalu, and Mt. Everest.

The Khumbu valley and Cho La pass trek fall on the Everest Circuit Trek that goes up to Kala Patthar, the highest elevation to view Everest in Nepal.

Khumbu Valley is the home of Sherpas in the Everest region. Khumbu is one of the three major Khambu and Sherpa settlements of the people of the Himalayas.

The other two settlements are Solu and Pharak. There is just one town in Khumbu Region, Namche Bazar.

Namche Bazar is the biggest settlement of the Khumbu region and the main trading center and hub of people living in the Everest region. Namche Bazaar has infrastructures like banks, post offices, the internet, and health posts.

Khumbu Valley’s elevation ranges from 3,300 meters to 8,848 meters, and it is the summit of Mount Everest. The region’s important settlement places are Namche Bazar, Tengboche, Lukla, Pangboche, and Monjo.

Cho La is a summit and is a summit pass connecting two villages of the Khumbu Region, Dzongla and Thagnak. 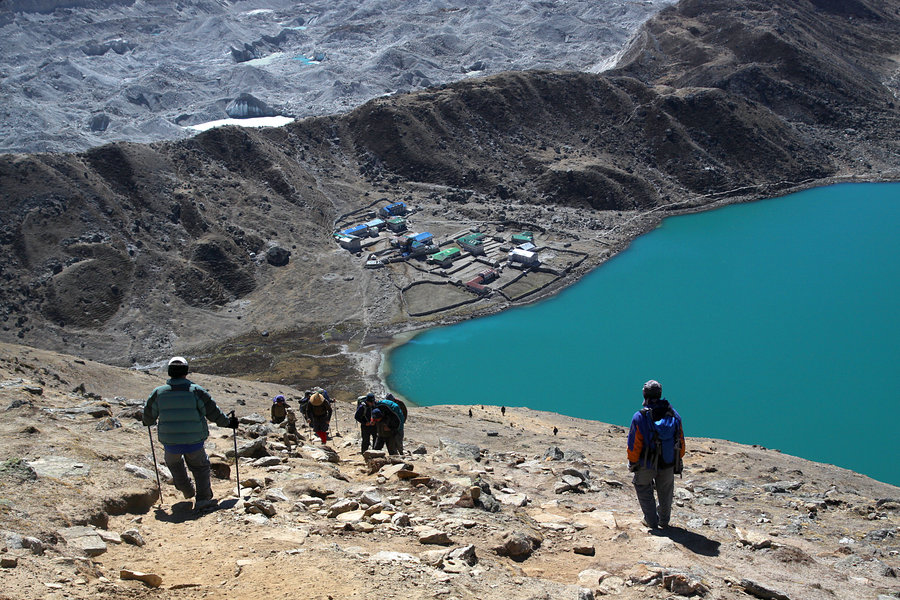 Khumbu Valley is the home of some of the tallest mountains in the world.

Guru Rinpoche, the founder of Tibetan Buddhism, hid the Khumbu Valley for future times when people would need them as sanctuaries. He described Khumbu in religious books as a valley surrounded by snow peaks.

Some highlights of the Khumbu Valley and Cho La Pass trek are:

Tengboche monastery is the largest gompa in the Khumbu Valley. The region also has many other monasteries near Tengboche.

The Tengboche gompa was built in 1916 and underwent some structural changes. The monastery was destroyed by an earthquake in 1934 and was later rebuilt.

The monastery was also destroyed by a Fire and was built by monks and volunteers. Followers from all over the world funded the construction after the Fire destroyed the monastery.

The monastery area is spiritual, and monks come to the monastery to learn and get enlightened. The village also reflects ancient Tibetan cultures and traditions.

The summit of Cho La gives outstanding views of Mt. Cho-Oyu, Lobuche, Cholatse, Gokyo, and Pumori. The pass also provides views of the pristine Gokyo lakes and Gokyo Valley. Gokyo lakes are sacred to both Hindus and Buddhists.

Ngozumpa Glacier: Ngozumpa is the longest glacier in the Himalayas. The rocky glacier is more than 36 kilometers long. 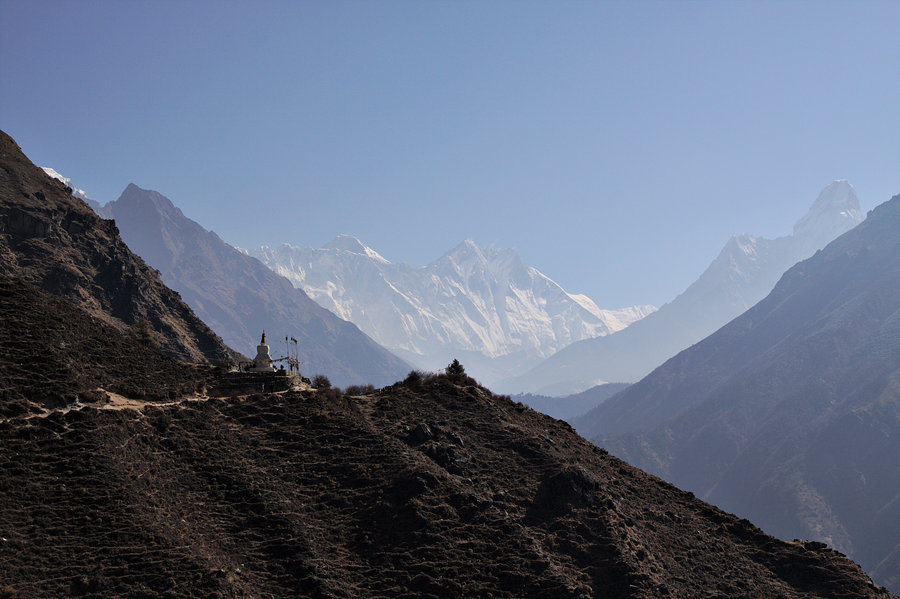 The Khumbu region and Cho La pass trek is a very strenuous trek, and it is better to have prior trekking experience. This trek is a high altitude trek and requires good physical fitness. Majestic views and sightings replenish some portion of the fatigue and tiredness felt in the trek.

The Khumbu region trek is graded as 8 or 9 in terms of difficulty. You will undoubtedly face difficulties in navigating the trek when passing cliffs at an altitude of above 5,000 meters, so make sure to carry climbing gears, ice boots and warm clothes and general medication to prevent altitude sickness.

Many portions of the trek consist of climbing small summits like Cho La and Gokyo Ri. These are very cold areas and sit above 5,300 meters above seas level. These summit passes are difficult to cross, and your trekking experience can be beneficial in traversing the pass safely and with ease. 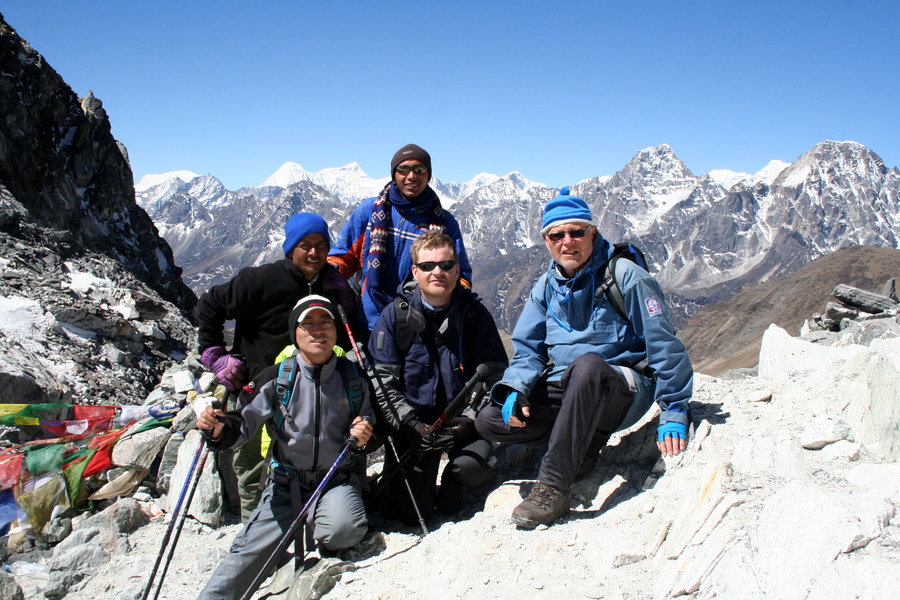 The Khumbu region lies at an altitude of 3,000 to 8,848 meters. Trekking in this region is classified as high-altitude trekking.

Trekking at such high altitudes comes with risk and discomfort too. You can get acute mountain sickness very easily in the Khumbu region.

You must categorize some extra days just for acclimatization to the surrounding. Acclimatization is very important to keep your body accustomed to the high altitude.

Scaling high altitudes without acclimatization a day before will lead to mountain sickness when you try to trek higher elevations the next day.

Make sure to spend a whole day in a nearby tea House before climbing Cho La pass and other high passes of the Khumbu region.

You can also take medicines to be safe from altitude sickness. Some drugs that help in preventing acute mountain sickness are Acetazolamide, Dexamethasone, and Ibuprofen.

Locals have their traditional methods to prevent altitude sickness. Most locals don’t suffer because they are familiar with high altitudes. If they suffer from mountain sickness, the local people use garlic and cloves to improve their condition.

You must also carry a medical kit because the trek is filled with rocks and uneven terrain. You will need general medical items like bandages and sprays to cure sprains and cramps. 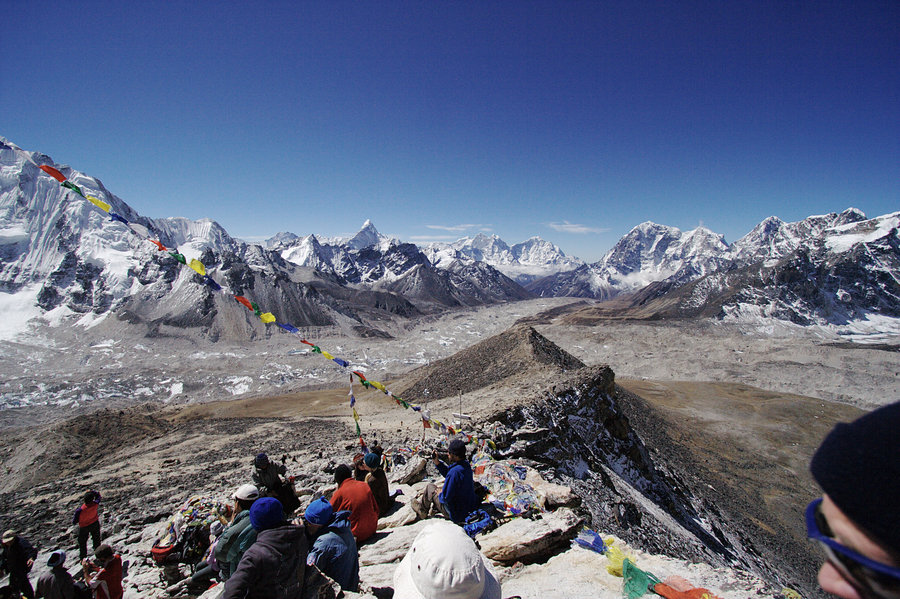 Some of the essential items crucial for Khumba Valley and Cho La Trek are:

Make sure you carry a water bottle, to keep yourself hydrated. You can carry toilet papers for convenience as lavish services are rare in tea houses in higher altitudes.

For further queries and information regarding Khumbu Valley and Cho La Pass trek, you can visit our website. You can also ask us your questions about our services, our work experience and any other details you want to know about our past work here.

What kind of Foods to Have During a Trek?
Tamang Heritage Trek: Visiting the Tibetan Villages in Northern Nepal