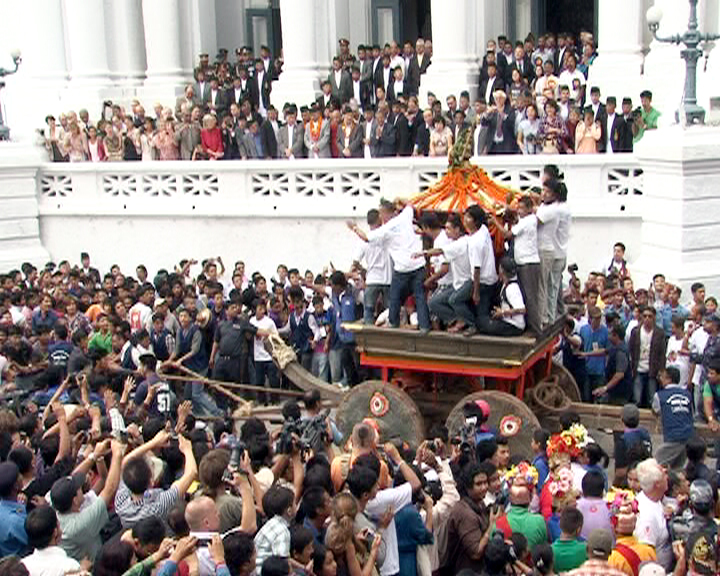 What is the meaning of Indra Jatra?

Indra Jatra, also known as Yenya is a festival celebrated in the Kathmandu, Nepal. It is the biggest religious street festival of Nepal. The word Yenya comprises two words, Ye and Ya, meaning “Kathmandu” and “celebration” respectively, so together it means “celebration inside Kathmandu.”During this festival, the deceased family members in the past years are remembered and honored.

There is another belief about the celebration of Indra Jatra. As per the Hindu mythology, Indra is the Lord of rain, and the king of Heaven and Jatra means procession. So, this festival is also dedicated to the Lord Indra.

According to another belief, Indra Jatra is celebrated to honor the Bahirab, the manifestation of Lord Shiva. There is believe that Bhairab is the destroyer of evil.

Myth Behind the celebration of Indra Jatra

As per the Hindu mythology, one day Lord Indra disguised himself as a farmer and came to earth in search of a flower parijat (Night Jasmine) for his mother Basundhara to perform a ritual. When he was plucking the flower at Maruhiti, a sunken water spout at Maru, the people caught sight of him and bound him like a thief. Then, he was put on a display in the town square of Maru in Kathmandu.

Indra’s mother got worried because of his long delay and came to Kathmandu and wandered around looking for him.  Later when the people knew, they captured the Lord Indra, they were greatly ashamed and released him immediately. Indra’s mother became grateful for his sons released, so she promised to provide enough dew throughout the winter to ensure a rich crop. There is a general belief that because of this blessing, Kathmandu started to experience foggy mornings from this festival onwards. 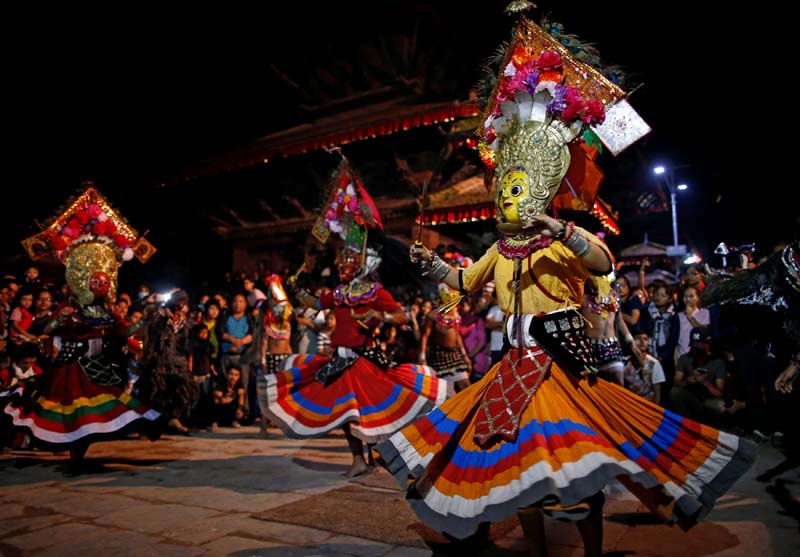 How is Indra Jatra celebrated?

Indra Jatra celebrated for the continuous eight days from the 12th day of the bright fortnight to the 4th day of the dark fortnight of Yanla, the eleventh month in the lunar Nepal Era calendar. Indra Jatra mainly consists of two events, Indra Jatra and Kumari Jatra. In Indra Jatra, there are masked dances of deities and demons and display of sacred images and tableausin honor ofIndra.

Indra Jatra starts with Yosin Thanegu, the erection of Yosin or Linga, a pole from which the banner of Indrais unfurled at the Kathmandu Durbar Square. The pole is taken from a forest near Nala, which is a small town 29 km to the east of Kathmandu. The pole is a tree shorn of its branches and stripped of its bark and is dragged in stages to Durbar Square by men pulling on ropes. IndraJatra marks the end on the last day when the Yosin pole erected at Durbar Square is taken down in a ceremony called Yosin Kwathalegu.

The first day of Indra Jatra is called Upaku Wngeu. In this day, the participants of Jatra visit shrines holding lighted incense stick to honor the deceased member of their family. Along with the incense stick, they also place a small butter lamp on the way. The tours take moves along the historic part of the city while singing the hymns. This procession starts at around 5 pm. Several other processions take place throughout the celebration, they are:

Kumari Jatra is the chariot festival of Kumari which coincides with Indra Jatra. The custom of this Jatra started during the reign of Jaya Prakash Malla in 1756 AD. In this day, three chariots are carried with human representatives of Ganesh, Bhairava and Kumari accompany by musical bands, which are pulled along the festival route of Kathmandu for three days.

It is another procession of Indra Jatra. The meaning of Mata Biye means to offer butter lamps. In the first day of the chariot, Kwaneya, a Newar community of Kathmandu honors deceased family members of the past year by offering small butter lamps along the processional route. They also present butter lamps to the friends and relatives on the way of the procession as a mark of respect.

The procession of Dagin re-enacts Indra’s mother going around the town in search of her son. In this procession, there is a man wearing mask accompanied by the musical band. It starts after the chariot of Kumari returns to Maru journeying around the town.

This procession takes place to form an alley at the south-western corner of Maru square and gets a pass to the western side of Kasthamandap. The participants of this procession follow the festival route north to Asan and the returns back to Durbar Square. It continues to the southern end of the town before returning to Maru.

This procession consists of a long representation of a holy snake made of reeds on which a row of an oil lamp is placed. An effigy is made and is suspended from poles carried on the shoulders and taken along the festival route. Bau Mata procession starts from the southern side of Kasthamandap at Maru. The moment when Dagin procession returns from the upper part of town and reaches Maru, Bau Mata processions sets off. This procession is organized by the Manadhar caste group of Newar community. 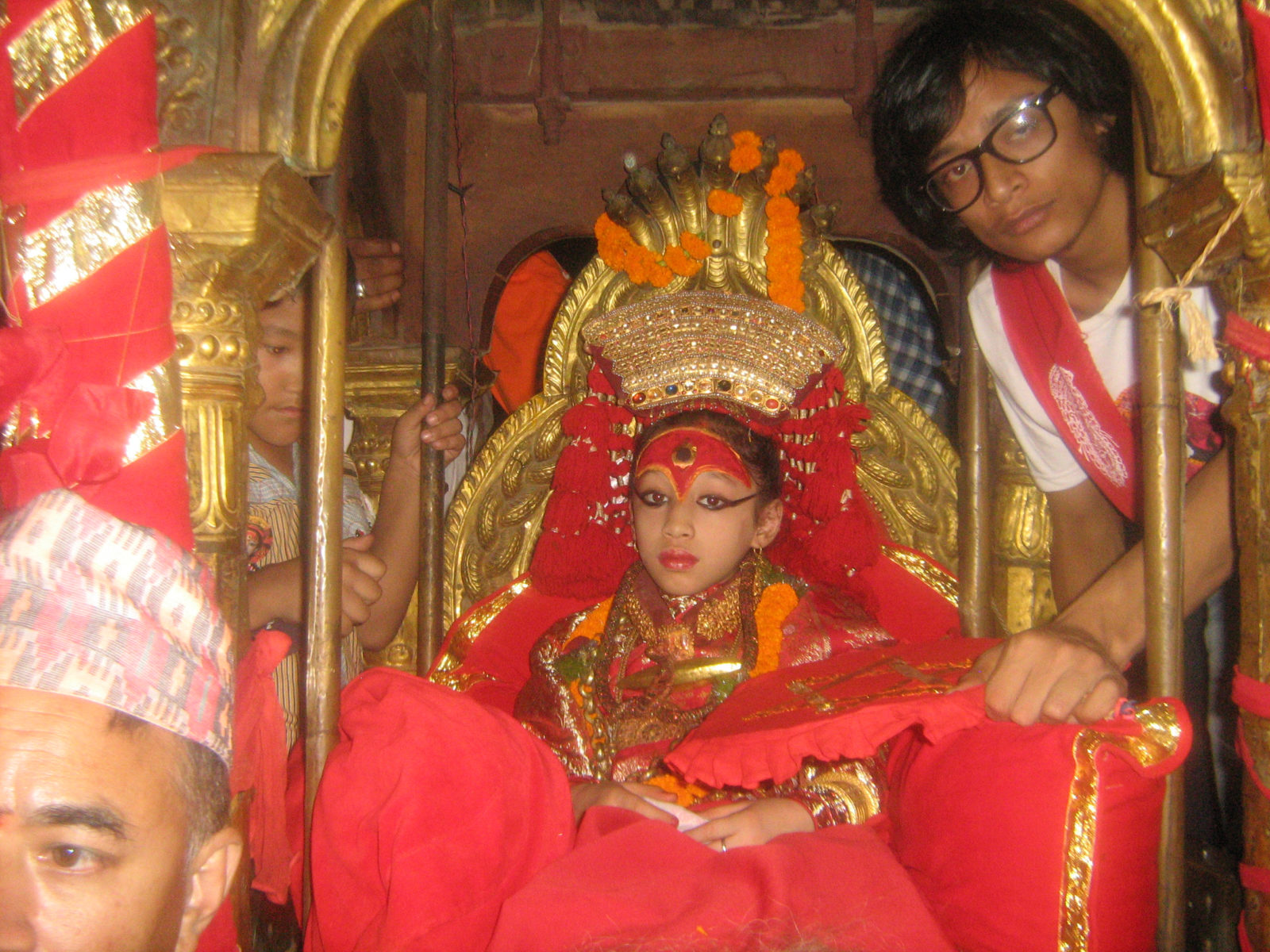 During the festival of Indra Jatra, several masked dances are performed signifying the importance of the whole celebration.

This dance is also known as Pulu Kisi, which is performed by the residents of Kilagal tole. There is a belief that Pulu Kisi is the carrier of Lord Indra himself. In this dance, Pulu Kisi goes through the streets of the ancient city of Kathmandu to search his imprisoned master. During this dance, the person impersonating Pulu Kisi does naughty and mischievous things by running through the streets and knocking anyone who comes in the path and swinging its tail in a very amazing manner: this act is viewed by people with great excitement and laughter. The masked dancer has a team of a musical band and a torch carrier in front.

The dance of Sawa Bhakku is performed by a group from Halchok, which is located at the western edge of the Kathmandu Valley. They make it round along the festival route while stopping at the major street squares to perform and receive offering form the devotees. In this dance, there is Bhairava in a blue costume, holding a sword and his two attendants in a red costume.

This dance is performed at several places like Kilagal, Hanuman Dhoka, Jaisidewal, Bangemuda,and Indrachowk. In this dance, there are several dancers wearing masks of various gods and goddesses, and they name them Kumari, Bhairav, Chandi, Daitya, Kawan, Beta and Khya.

This dance is performed by Mahakali Phykan from Bhaktapur at the Durbar Square and in the major streets around the Kathmandu valley. It features dancers dressed in a costume the Khyah, a fat, hairy ape-like humanoid creature in Nepali folklore. Antics and a lot of tumbling mark this dance.

When is Indra Jatra celebrated in Nepal in 2018?

Indra Jatra is an eight-day long festival celebrated every year from the day of Bhadra Dwadasi to Ashwin Krishna Chaturdasi. This year Indra Jatra starts from Aswin 5 and ends in Aswin 13 as per the Nepali Calendar. According to the English calendar, the festival is from September 21 to September 29. The main day of attraction is on 24  September. Do not forget to visit in the Kathmandu Durbar Square are to witness this vibrant celebration.

Bridim: An Oasis of Tamang ethnicity of Nepal
Nepal Visa Requirement: Know Everything about coming to Nepal