Home » Trekking » Gosaikunda: The Himalaya’s Frozen Lake That Sweeps Away Your Sins

Gosaikunda, also called “The Frozen Lake” is a freshwater lake located inside Langtang National Park in Nepal. The lake situates at the height of 4,380 meters in Province-3, just 90 km north from Kathmandu.
The area of Gosaikunda has nine major lakes including Gosaikunda, Saraswatikunda, Bhairabkunda, and Surajkunda. Gosaikunda area consists of 108 glacial lakes. The entire Kunda area is listed under RAMSAR Site, an international treaty for sustainable use and conservation of wetlands. 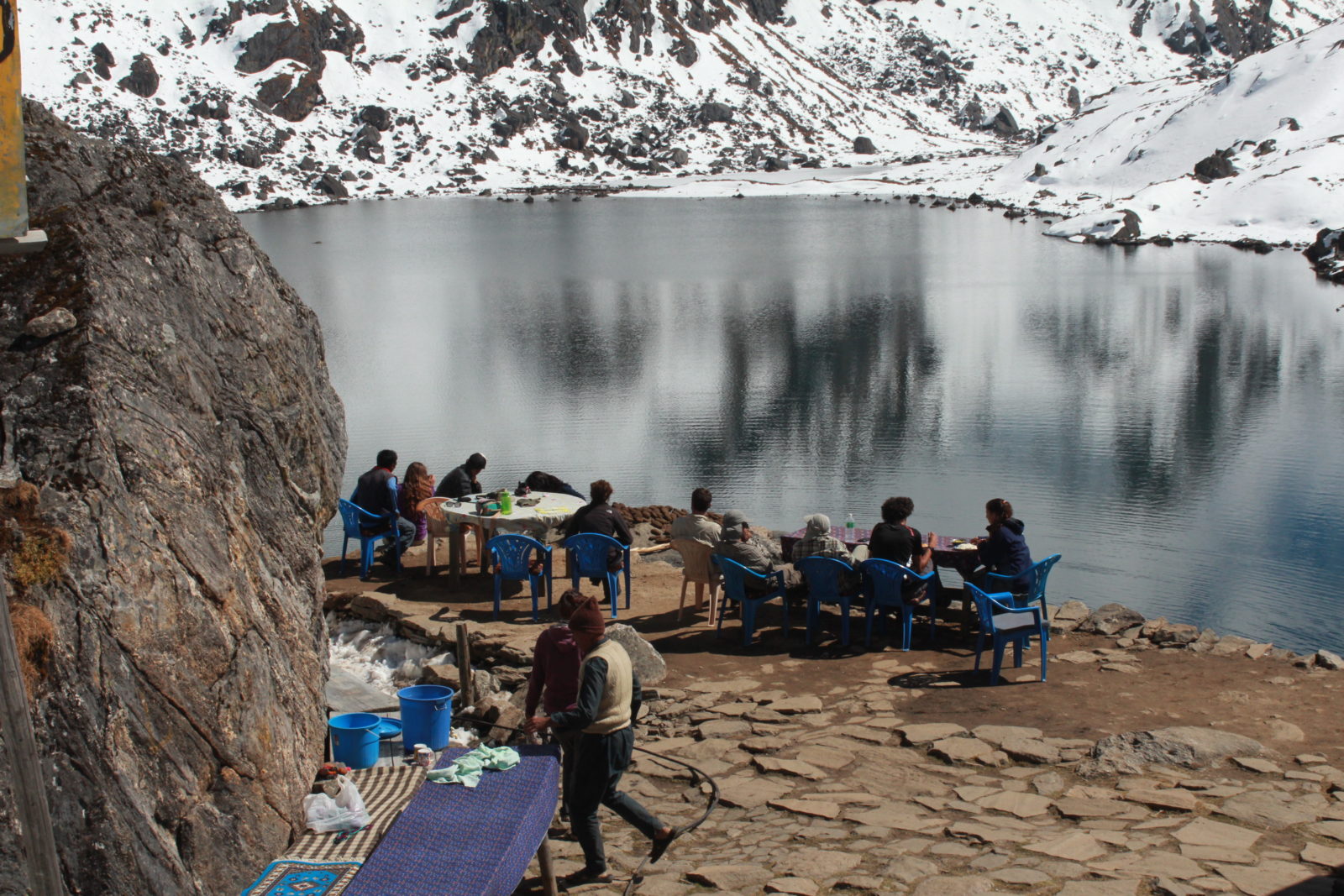 Gosaikunda carries spiritual importance for Hindu devotees. The Hindu scriptures attribute Gosaikunda as the abode of deities Lord Shiva and Goddess Gauri. The water of Gosaikunda serves as a vital significance in festivals like Gangadashahara and Janai Purnima (the thread changing festival).

Thousands of pilgrims visit Gosaikunda in Janai Purnima. It is believed that one dip in the holy waters of Gosaikunda sweeps away all your life sins and paves a pathway to heaven.

The epics say that Lord Shiva struck a mountain in the Himalaya with his trident (Trishul) to search water after he drank poison from Samudra Manthan. Water from the Himalayas came bursting out from the point of impact of Lord Shiva’s Trishul and hence formed Gosaikunda.

Weather of Gosaikunda Area and When to visit The Frozen Lake 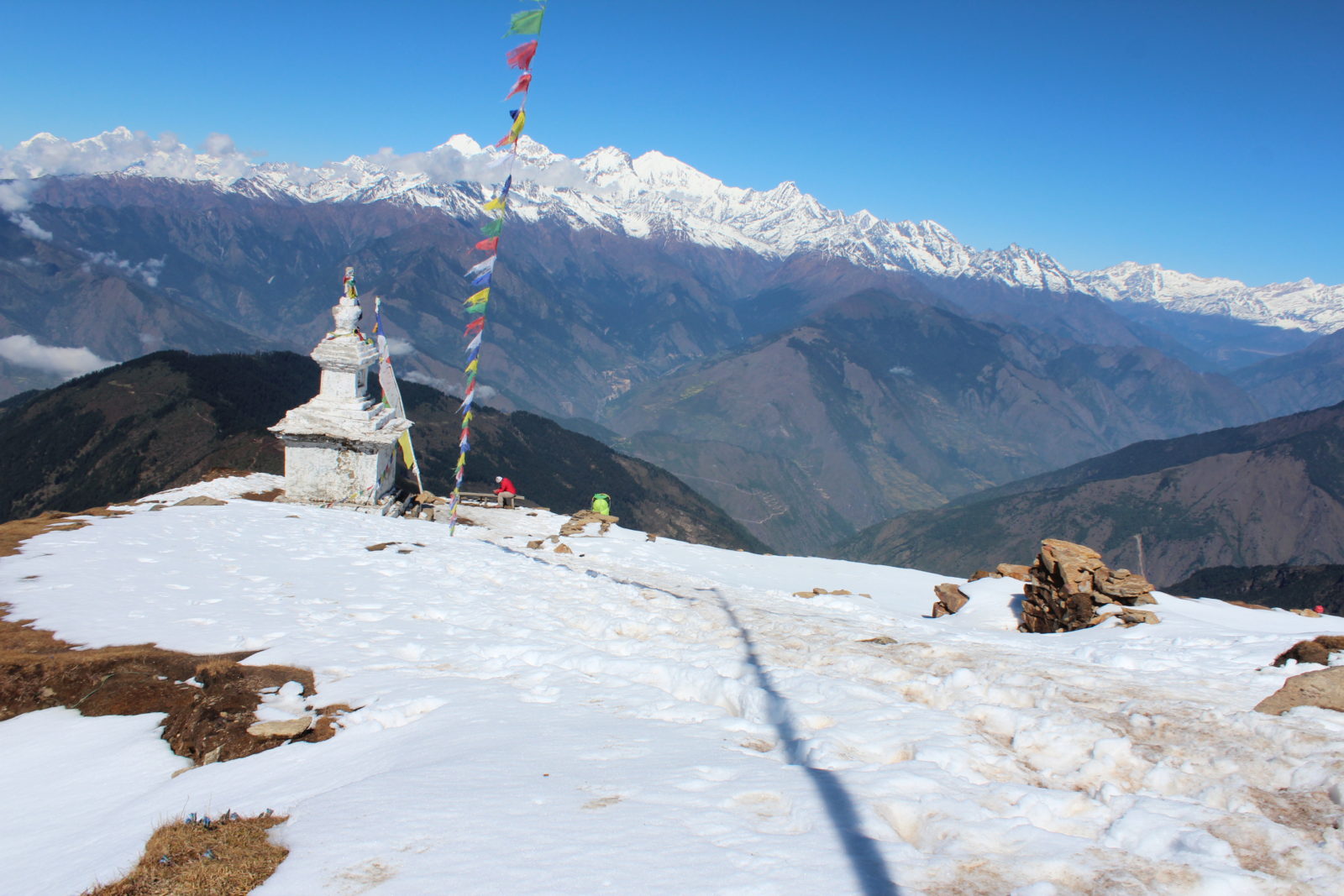 Gosaikunda lies in borders of the Himalayan region of Nepal and climate near the lake is always cold. The average temperature in summer is 0°C to 10°C, and in winter, the temperature is mostly below zero. Weather conditions fluctuate continually in these rocky hills.

Summer is clear and is followed by rainfall in the monsoon. Winter is snowy with snow falling from clouds regularly.

The best time to visit Gosaikunda is from April to early June and from August to October. Avoid visiting Gosaikunda in Monsoon and Winter season if you want to capture the scenic beauty of the lake and mountains nearby.

Clouds block the views in the rainy season, and the lake remains frozen in winter. So the preferred season to visit the sacred Gosaikunda is in Autumn and Summer.

What to expect en route to Gosaikunda?

Travelling to Gosaikunda doesn’t mean you trek for a few days, reach a beautiful lake and then return. Yes, Gosaikunda is mesmerising, but the scenery along the trail and panoramic views of mountains like Langtang –Ri, Langsisa, Langtang Valley and Ganesh Himal are breathtaking as well.

The trek to Gosaikunda meets high-altitude passes like Lauribina pass(4,610 meters). The pass translated in Nepali means “Without Stick.”

Tamang and Sherpa Villages and Traditions

The Gosaikunda trek intersects many small villages and people living in these chilly and rocky hills. The people living along the trekking routes and teahouses are Tamangs and Sherpas. Majority of Tamang and Yolmo Sherpa and their Tibetan traditions (music and dance) welcomes you when travelling to Gosaikunda.

These people follow Shamanistic Tamang culture and Tibetan Buddhist traditions. The highest peak visible in the trek to Gosaikunda is Langtang Lirung at the height of 7,246 meters.

Since you will be trekking in Langtang National Park, your eyes can meet some beautiful animals and plants. Tourists have often described encountering the almost extinct Red Panda and Snow Leopard. The park is also a home to musk deer, Clouded Leopard and Himalayan Tahr.

Marijuana (cannabis) also grows wild in many parts of the National park. Local Tamangs and Sherpas traditionally use marijuana for medicinal purposes for themselves and also for their livestock. Local villages use cannabis to remedy stomach ache, pain in bones of hands and feet, and acidity. It should be noted that the cultivation and use of marijuana (cannabis) is illegal in Nepal.

Gosaikunda trek offers a panoramic view of many snow-capped mountains of the Langtang area and also some Annapurna range mountains if no clouds are surrounding the mountains.

Where is Gosaikunda and Which route is best to reach Gosaikunda?

Gosaikunda lies inside Langtang National Park in central-north region of Nepal. The lake is one of the most preferred destinations of tourists who visit Nepal. The lake sits amid snow-covered hills at the height of 4,380 meters. The lake stays frozen for six months in winter, thus named The Frozen Lake. Gosaikunda lies directly north of Kathmandu, and there are several routes you can choose to reach the sacred lake.

There are many trails to reach Gosaikunda, but local people and trekkers dominantly use two routes. The two routes vary mainly in length of the trip and destinations visited in the trek. The two most used routes are:

This is the shortest trip for Gosaikunda. Tourists looking for a quick yet memorable trek opt for Gosaikunda trek. The trek starts from Dhunche and ends returning the same way. The trek duration is six days at the maximum and can be even shorter for experienced trekkers.

The trip starts with a ride from Kathmandu to Dhunche. Local buses take about 7-8 hours to reach Dhunche, and it takes about 6 hours in a private reserved car or jeep. You can choose to rest in Dhunche or make a short trek to Deurali to stay the night.

The next day, we reach Sing Gompa crossing several agricultural farms and reaching higher elevations. Notable places to visit in Sing Gompa are old monasteries and cheese factory. The cheese factory makes cheese from yak milk, and many visitors buy yak cheese to eat during the trek and also as a memento of the trek.

The next day, we reach Gosaikunda after conquering Lauribina pass at 4,610 meters, even higher than Gosaikunda lake. After spending a night in the vicinity of Gosaikunda, we circle the lake in the morning and start our descend to Sing Gompa, later to Dhunche, and finally to Kathmandu.

Tourists who have longer stay in Nepal plan the 18-day trip in circling Langtang Valley, Gosaikunda, and trekking to the outskirts of Kathmandu Valley. Langtang-Gosaikunda is an extended trek option, and worthwhile as the route covers the entire Langtang valley area along with major lakes in the Gosaikunda area.

This trekking starts from Syabrubesi, a hillside village located an hour drive after Dhunche. The trip passes through infamous Langtang valley. You will stay the night over in Langtang village and visit nearby places along with Kyanjin Gompa.

You will also see the spectacular ice faces and tumbling glaciers of Langtang Lirung, and a panoramic view of peaks of Langtang area from an area nearby the village.

The trek then reaches Sing Gompa through Thulo Syabru and visits old monasteries and yak cheese factory. Then you reach Gosaikunda after crossing the Lauribina pass. The following days will be continuous trekking through thick jungles from Ghupte to Chisopani, crossing several hills along the way. The trek finishes in Sundarijal, a place filled with waterfalls and small ponds.

You can opt to have a bath in the falls of Sundarijal, only inaccessible falls. Some falls are extremely dangerous and should not be approached. The trip finishes after taking a bus ride to Kathmandu from Sundarijal.

You can book your Gosaikunda-Langtang trek from our website here. We look forward to creating new memories and experience with you on your visit to Nepal. 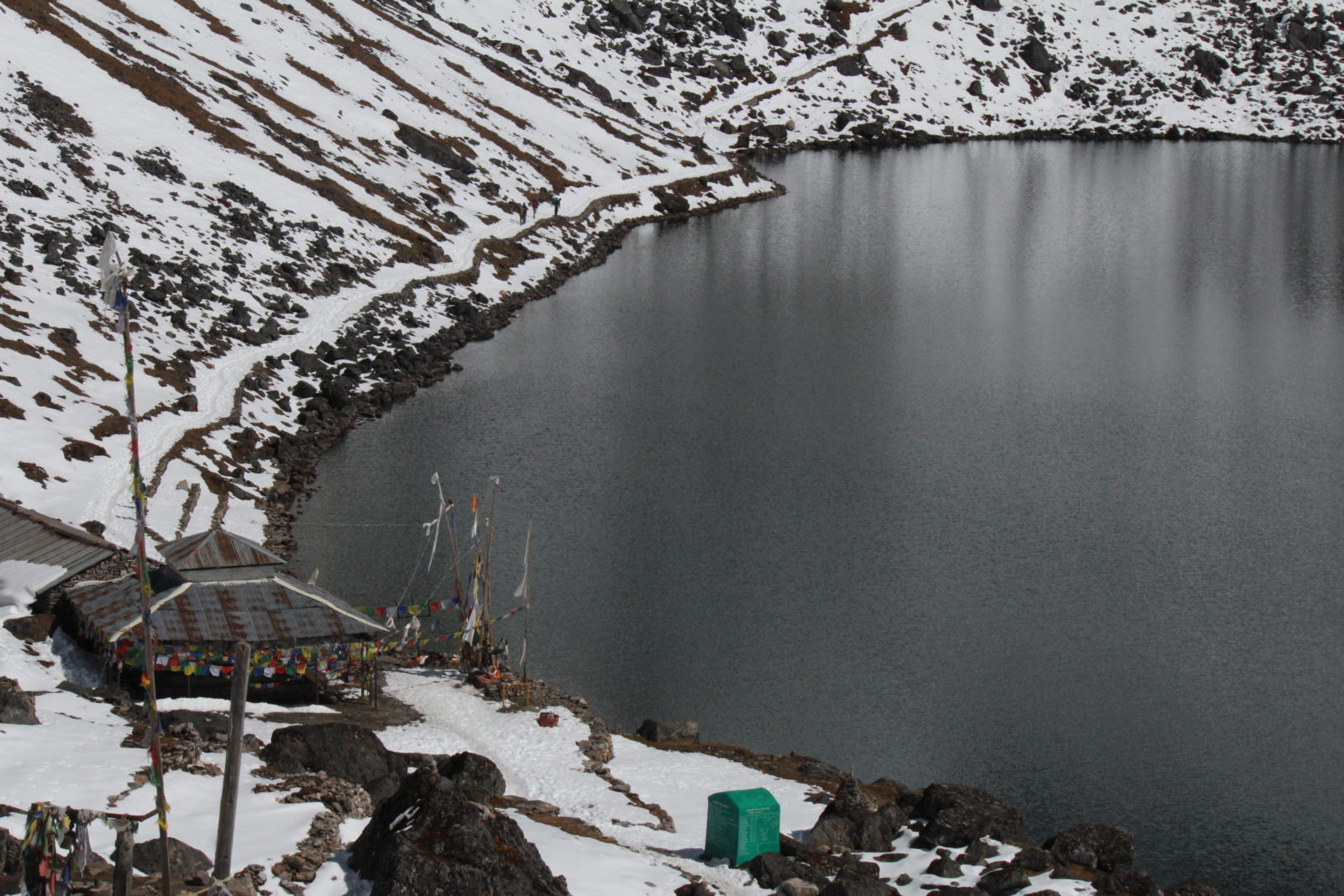 Acute Mountain Sickness is discomfort felt when scaling at higher altitudes. Exposure to low amount of oxygen and dehydration causes altitude sickness at high altitude. Altitude sickness presents as non-specific symptoms such as flu, hangover, breathlessness and another form of discomforts.

Minor symptoms like breathlessness and nausea start from 1500 meters and lead to nose bleeding, rapid pulse, vomiting, and excessive flatulation as you gain altitude.

If you continue to ascend to a higher elevation in discomfort, you will be vulnerable to serious symptoms like Pulmonary Edema (fluid in the lungs) and Cerebral Edema (swelling in the brain).

If you happen to develop severe edema symptoms, you must descent instantly and acquire medical attention. Negligence to symptoms of altitude sickness can cause severe threats to organs, and even cause death.

Some significant edema symptoms are fever, shortness of breath even when resting, gradual loss of consciousness, continuous nausea and vomiting and retinal haemorrhage.

You can avert minor symptoms by climbing slowly. Slow and gradual ascend increases the acclimatisation process and gives a better chance of avoiding altitude sickness.
Drink a lot of fluids during the mount and avoid taking alcohol and sleeping pills during trekking through high altitudes. Nepalese people use garlic and cloves to avert altitude sickness. Garlic thins the blood and enhances blood flow while clove helps the body to be oxygen efficient. 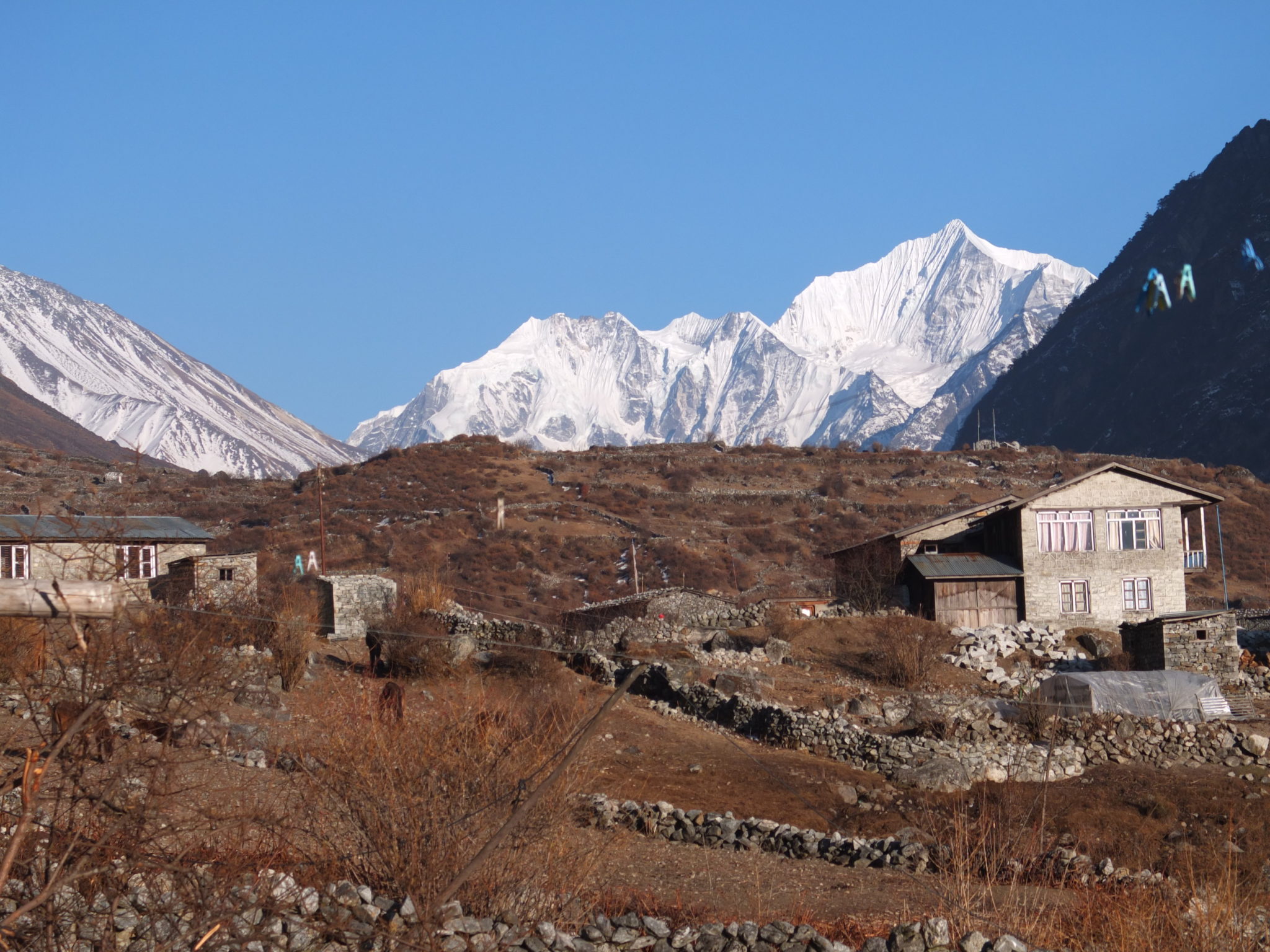 All the equipment needed for the trek is available in nearby stores to purchase and for hire.

For further details, you can leave your query to email-id here.

What kind of Foods to Have During a Trek?