Bungee Jumping (also called Bungy Jumping) is an exciting and thrilling activity that involves jumping from a tall structure. The structures are normally fixed such as a bridge, building, or a crane. However, the jump can also be done by jumping from a moving object like a hot air balloon or a helicopter.

Despite being small in size, the beautiful country Nepal offers various options of adventures to the visitors. Not only with the beautiful lush forest, nature has blessed Nepal with wonderful landscapes, the majestic mountains and many resources like rivers. Whether it is for site seeing, white water rafting in the swift flowing river water, trekking in the high Himalayans or the bungee jumping, a country like Nepal would be a perfect destination.

About Bungee Jumping of Nepal

Bungee jumping primarily involves tying an elastic cord to the jumper. The actual thrill of the jump occurs due to the free-fall and the rebound of the coil. Once the jumper jumps down from the tall structures, the elastic cord previously connected to the body stretches. Afterwards when the coil recoils, the jumper again flies upwards. The to and fro motion continues as long as the Kinetic energy in the cord does not become null.

Also, Bungee Jumping of Nepal has aided in eco-tourism with their small yet valuable contribution. Bungee Jumping is already a fun sport and people visiting for it usually stays in a tented camps as the concrete buildings aren’t available for the accommodation purpose and is one way of helping the nature. Also, the resort around uses the local vegetables and products as per the season which are produced by the villagers which ultimately supporting sustainable tourism. The bridge build above the Bhote Koshi River has also contributed a lot to the locals.  Before it used to take half an hour walk to reach the river and then cross the Bhote Koshi and walk for another half hour to reach the highway. So in overall, bungee jumping in Nepal has aided in uplifting the local economy by providing employment to the locals and using the local products like vegetables and fruits.

So, wait no more to experience this ultimate thrill. Be brave enough to make a jump that would be your experience for lifetime. Here are the places that will provide you with the best experience of the thrilling Bungee jumping adventure in Nepal.

The suspension bridge of Bhote Koshi

Location of the spot

Criteria required for the Bungee Jump

Bungee jumping in Bhote Koshi Gorge has no strict prohibitions. There are no any hard and core rules about whether or not being eligible for the jump. The jump does not restrict anybody on the basis of their age. If you are willing to face the dare, then the jump always welcomes you irrespective of your age. However, jumpers below 18 years of age will require their parents to sign the parental consent before the jump. The maximum weight of the jumper is 100 kg. The jumpers are suggested to wear tight and comfortable clothes and closed shoes during the jump.

The Last Resort is operating the jump for last 20 years. The jump is most probably the most exciting and fantastic jump in the world. When you are all set for the jump, close your eyes, and imagine yourself on the highest jumping spot in the world beneath which runs the fierce Bhote Koshi River. Now start the countdowns: 5, 4, 3, 2, 1, and there you go. Falling freely from the 160 meters high bridge and letting your soul free. You are falling in between the ridges of the hills and it feels like being in a different world. Such a heart pounding experience, isn’t it?

Best seasons for the longest Bungee Jump in Bhote Koshi

Price/Cost of the Bungee Jump

The price structure for the jump is as follows:

For Nepali citizens: Rs 5500 per individual

For Indian and Chinese Nationalities: Rs 8200 per individual

For foreign Nationalities: Euro 90 per individual

Note: The cost includes one jump, two-way transport facility by a private bus and a meal. Extra charges will be applied if you want the photograph and the videos of your jump.

Pokhara, the capital city of tourism in Nepal, is already famous in the world for the wide range of adventures that it provides for the tourists. The Paragliding, Ultra Flights, Zip Flyer, Trek, Stand up paddle, mountain biking are some of the activities that the tourists enjoy the most in Pokhara. Adding further on the list, Pokhara presents another new adventure of water touch Bungee jumping to the tourists. The activity officially started on 23rd September 2014.

The water touch Bungee jump is located in Hemja, near the Tibetan camp, in Kaski district in Pokhara. The jump is completed from a steel cliff which is 80 meters high. Below at the ground, there lies an artificial pond which is about 18 to 20 meters deep. The jump allows about 30 to 40 persons per day.

You can take a jump by your own or with your friend. After jumping from the tower, you will fly freely in the air for some time and then make a dive into the lake at the end. As you reach the bottom, make sure that your head hits the surface of the clear water in the lake.  Once you are landed in the lake, you will be facilitated with the boat to pick you from the pond. You will be starting your jump high in the air, floating down and then ending it with the splash in water. Such a wonderful and new experience of the adventure it is.

Price/Cost of the Jump

For Nepali citizen- Rs 3,490 per individuals

For Foreign Nationalities- Rs 6,890 per individuals 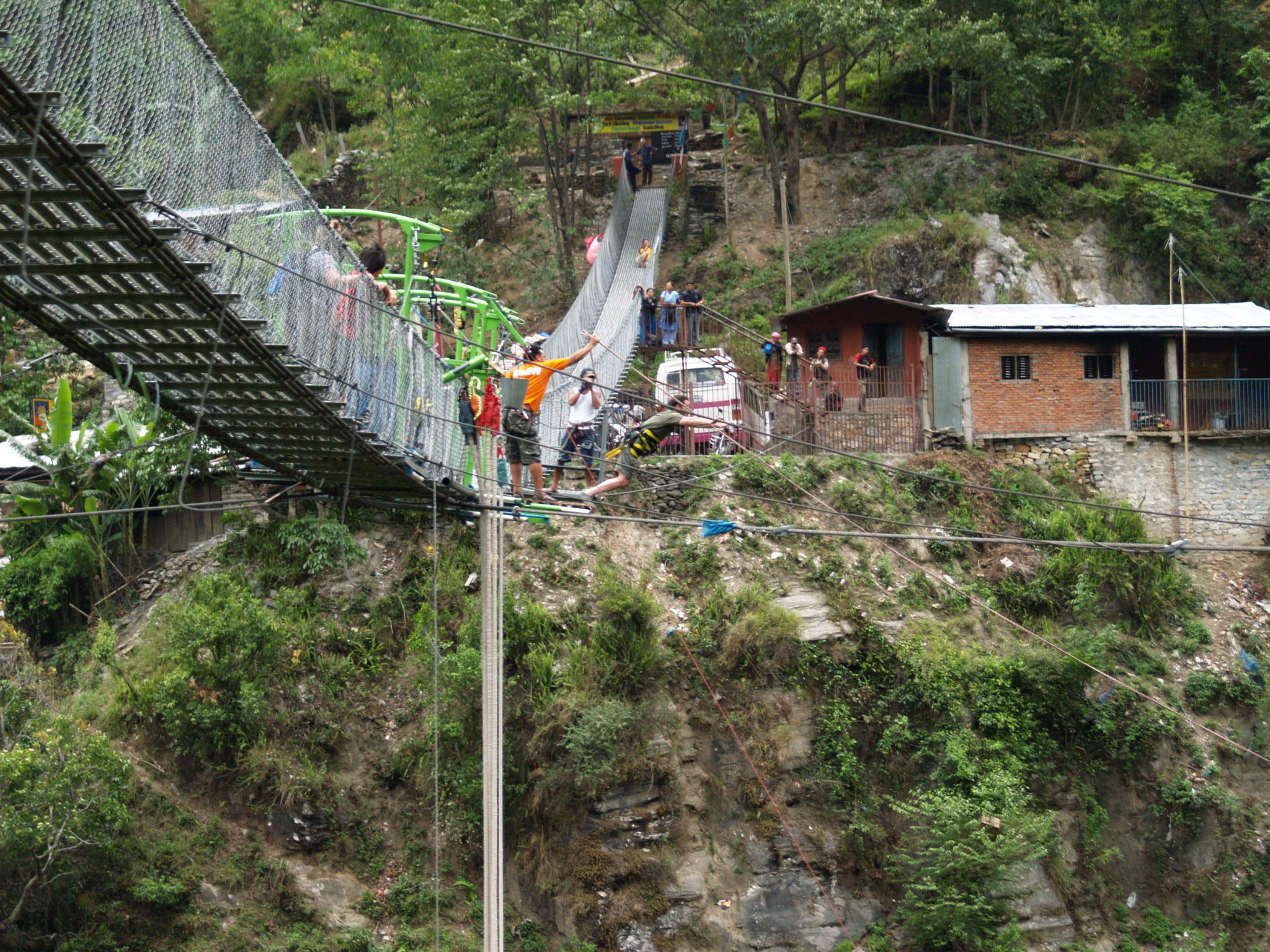 Risk associated with the Bungee Jumping

Although Bungee jumping is an exciting adventure that is being popular these days, there are still some risks that are associated woth the activity. The length of the cord is a prime factor that requires major attention, which otherwise may cause accidents and injuries. Accidents may also occur if the cord is not connected properly to the jump platform. In addition, the coiling of the cord around the neck of the jumper may also cause serious injury.

The consequences of the injuries during the jump may include the intravascular pressure and the eyesight damage. The Retinal Hemorrhage is also the possible effect which may last for several weeks. Thus, previous precautions should be strictly followed. The following are the conditions under which an individual is not suggested to try the jump: